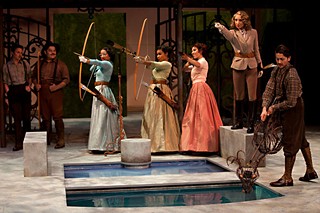 
Until Saturday, Love's Labour's Lost had been right up there with Pericles and Timon of Athens on the list of Shakespearean plays I've neither read nor seen. I'll admit it: I'm ashamed. But, as they say, ignorance is bliss, and the UT Department of Theatre & Dance's polished and lively production of Love's Labour's richly rewarded that ignorance with a heart-wrenching, gut-busting, sigh-inducing theatrical experience that reinvigorated my belief that Shakespeare's wit will never dull.

Guest Director John Langs sets Shakespeare's characters at the hoity-toity University of Navarre in affluent postwar America, with King Ferdinand as dean and Berowne, Longaville, and Dumaine as his boisterous students. In pursuit of higher learning, the four sign an ill-fated three-year contract that mandates an austere lifestyle and designates the school as a no-girls-allowed zone. But when the drop-dead gorgeous princess of France shows up with three blushing companions, the men pick their jaws up from the floor and frantically renounce their oaths. But (spoiler alert!) contrary to my intermission expectations, there's no satisfying quadruple wedding at the end of Act V. We are left with something much more profound.

Wordy and rhyme-y and lengthy as the play is, I'm baffled that it is not performed more often, especially in light of the infectious energy that radiates from the UT production. (I should note that Austin Shakespeare staged Love's Labour's last summer, directed by Chronicle Arts Editor Robert Faires.) The tight ensemble maintains impressive pacing throughout, thanks to their remarkable camaraderie and stage chemistry – especially among the eight lovers and between pompous profs Holofernes (real-life professor Lucien Douglas) and Sir Nathaniel (Michael Dalmon). Charismatic MFA candidate Kyle Christopher Schnack infuses Berowne with equal parts Animal House and St. Crispin's Day speech, and the play's subplot benefits greatly from John Smiley's wonderfully silly Don Adriano de Armado.

The show is blessed with equally skilled designers who bring the early Fifties to life: Proletina Veltchev's costumes are luscious and detailed, and Jocelyn Pettway creates a stunning, two-level, faux wrought-iron set – complete with excellently utilized pools of water. Cheng-Wei Teng's lighting design and Billy Henry's sound design highlight the play's joy and sadness, helping the audience grapple with the wide range of emotions onstage. The Fifties setting is entertaining and visually striking, but an attempt to portray interracial relationships has mixed results: Though it's relevant as the boys tease Berowne about his "black" love, the idea fizzles out toward the end. Langs also modernizes Shakespeare's verse, which some audience members may find refreshing; however, I was disappointed that we lost much of the original text's rhythm. Still, there is much to love in Love's Labour's Lost, a venture into Shakespeare's canon that I heartily enjoyed.