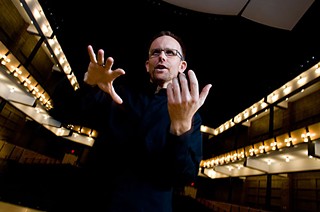 That chorus of hallelujahs you heard last week? Just Conspirare reacting to the news that it was receiving $1 million from the Kodosky Foundation. It's still rare for an Austin arts organization to score a seven-figure boon like that, and still rarer for one not to come attached to a building of some kind. But rather than join Austin's cultural construction boom and raise a home of its own, our Grammy-nominated professional (and itinerant) choir will use that million to do more of what it already does so well: make exceptional music. The gift anchors a new $2.2 million fundraising campaign to mark Conspirare's upcoming 20th anniversary and lift its international profile even higher.

A Legacy of Sound: Shaping Conspirare's Future will apply the campaign funds in these five ways:

• $1 million to boost Conspirare's release of commercial recordings on the Harmonia Mundi label from one every other year to two or more per year;

• $500,000 to a Fund for Artistic Innovation, which will allow Conspirare to commission more new work from both established and early career composers and explore new uses of technology and multimedia in choral performance;

• $375,000 to expand the choir's touring program, both nationally and internationally; and

• $200,000 to retire the organization's debt and establish a cash reserve for long-term financial stability.

With additional early support from the Still Water Foundation, Mattsson McHale Foundation, and others, the campaign currently stands at $1.5 million – in other words, 68% of its total goal. Look for – make that listen for – details of the choir's 20th anniversary season in early May. For more information, visit www.conspirare.org.