How far can Rubber Repertory push you? 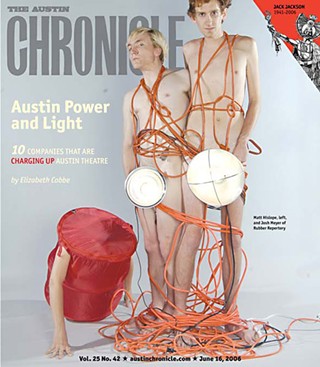 Exposed: Matt Hislope and Josh Meyer on the Chronicle cover in 2007

When Rubber Repertory started auditioning for its new show – the company's last before an "indeterminate hiatus" as half of its producing duo moves to Los Angeles – they didn't know much of anything about what they'd be putting on stage. "Our one thing was that we didn't want audience participation," co-Artistic Director Matt Hislope says.

"We wanted to put on a show," his creative partner, Josh Meyer – the moving-to-California half of the duo – adds. To help them create the performance that is Jubilee, running now at the Off Center, they looked to cast 10 people they'd never worked with before – but whom they trusted to follow them wherever they might be going.

"One of the reasons this group was selected was that they were literally up for anything," Meyer says. "We knew they'd be game for going on this journey with us. They seemed willing to go anywhere. They were all really committed." At this point in the company's career, Rubber Repertory is likely to attract the sort of performers who find being "up for anything" and "going on a journey" to be especially appealing: This is the company that built its reputation on performances including the "X-rated self-help odyssey" Mister Z Loves Company, the outright pornographic A Thought in Three Parts, and the audience-participatory performance pieces Biography of Physical Sensation – which involved an audience member wearing a vibrator throughout the duration of the show, among other experiences – and The Casket of Passing Fancy, in which audience members were offered opportunities like "Who wants to be made into a sandwich and eaten?" and "Who wants a one-on-one yoga session in the nude?"

"This is a cast that was really willing to go to really sexual places," Meyer says, and Hislope agrees. "They wanted to be naked all the time."

So, great, right? Let's hear what sort of acts of radical depravity and erotically charged boundary-pushing the "up for anything" cast got up to.

"We had 'Youth Group Week,'" Meyer says cheerfully. "We were feeling what it would be like if we were Christians. We got the group to participate in activities as a youth group. We shared personal experiences and had a lot of activities and games, and then culminated it with a worship service together at the end of the week."

"And what were you worshipping?" I asked, curious if the pair had managed to find a way to push the group of mostly atheists they had assembled to one of the few places that was likely to be well outside their comfort zone, too.

It's a very specific skill, figuring out precisely what it'll take to make seemingly any group of people deeply uncomfortable. It also seems to be one of the crucial parts of what makes Rubber Repertory's work so transformative and life-altering for the people who participate.

Before Jubilee, Rubber Rep's most recent show was Surprise Annie, a series of performances they enacted with solo performer Annie La Ganga, who delivered improvised monologues each night. The hook for this show was that La Ganga would be taken to the performance each night wearing a blindfold, and every performance would be in a surprise setting. Some of those environments were novelties – a private room at Dart Bowl, for example, or the back of a stretch Humvee limo – and some of them were unique, unlikely performance spaces that enabled La Ganga to create something special. 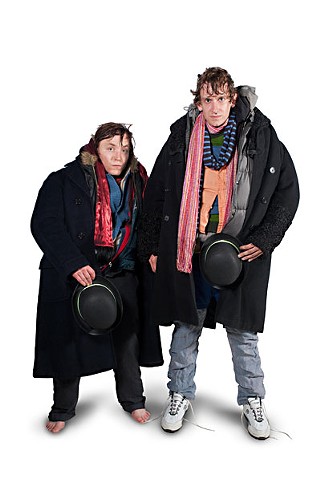 "My favorite night was at Austin Market Research," Meyer says. "The audience was in the room usually reserved for the clients. Annie was on the other side of the one-way mirror, so they could see in, but she couldn't see them at all. That was a great show."

This is the sort of thing that happens, sometimes, when you're constantly looking for ways to push people – you push them to places where the unexpectedly magical can happen. During Biography of Physical Sensation, audience members who elected to participate as fully as possible by choosing a "big chair" had similar reactions. In his review of the show, Avimaan Syam wrote in the Chronicle: "An anesthetic was rubbed across my lips and gums, paper towels were stuffed up my nose, a chin strap was placed so I could barely move my jaw, a hideous mask was placed over my head, a brace was applied to my neck, some sort of weight was applied to the small of my back, and my legs had to be propped up at an uncomfortable angle for the next hour of the show. ... Even though I missed chunks of the show and was subject to intense discomfort, I wouldn't have traded my seat for anyone else's."

For The Casket of Passing Fancy, the entire point of the show was to give people experiences that had the possibility of being transformative. On the stage, an actor playing the Duchess offered audience members the opportunity to perform the sort of actions that a person is likely to remember for the rest of their lives: "Who wants to tattoo an ass with their name?" before accompanying Hislope to a tattoo parlor on Sixth Street, or "Who wants a ride to the border right now?" before venturing forth toward Juarez for an overnight trip with Hislope. This pushing of boundaries and this attempt to find ways to do things that haven't been done before – certainly not onstage or as part of a theatre piece, and definitely not in Austin – has made the opening of every show a bona fide event and helped them recruit a cast of 10 "up for whatever" types who'd commit to 55 nights of rehearsal over an 11-week period for Jubilee. It's given them the opportunity to create something very special.

But there's a question that comes with all of this, too. If you're willing to push boundaries in ways that no one has done before in the context of Austin theatre, there are times when "making people uncomfortable" can cross from an opportunity to see things in a different light into something that is downright unpleasant. So how do you walk that line? 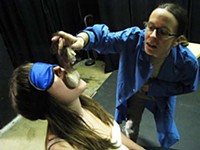