To the list of Acia Gray's many honorifics – world-class tap dancer, award-winning choreographer, best-selling author, master teacher, Austin Arts Hall of Famer, et al. – may we please add archaeologist? With the premiere of April Fools, the Tapestry Dance Company artistic director has again excavated dances from the fossil bed of tap's past and restored them for new generations to admire. And as with the historic routines in the international touring hit The Souls of Our Feet, the baker's dozen that Gray recovered here were lost treasures to rank with Tutankhamen's golden masks.

Where Souls mined material from the silver screen, Fools unearths dances from vaudeville, with each Tapestry dancer assuming the persona of a vintage variety performer – suave song-and-dance man, baggy-pants clown, leggy chorine – replete with their own show-biz moniker: Mr. Midnight, "Big Bellied" Lektor, Lorelei "Lovely Legs" Starr. The flamboyant characters let the dancers indulge their comedic sides, and none seized the opportunity more eagerly than Matt Shields, whose Gallic Lothario, Jack "4 Taps" LeBlac, growled come-ons to les femmes in an accent that would've made Pepé Le Pew blush. The ringleader for all this tomfoolery was Gray, duded up in a tux and a pencil mustache. Mostly, her Harmon "Is He or Isn't She" Knight yapped at the cast like a Flatbush cabbie, but in Act II "he" appeared in a blond bouffant wig and dazzling red-sequined gown – though with 'stache intact – to deliver the riotously saucy blues song "If I Can't Sell It, I'll Keep Sittin' on It." For that performance alone, Gray deserves to have "comic virtuoso" appended to her list of titles.

But, as ever with Tapestry, the greatest joys lay in the dances. The cast tripped through the classic routines as lightly as veteran hoofers who'd been dancing them for ages. Taking on Sammy Davis Jr.'s "Me and My Shadow," Travis Knights was smoother than Mr. Midnight's silk robe. Wearing a Harpo Marx-esque expression mixing innocence and mischief, Thomas Wadleton channeled "Baby Laurence" Jackson's jazzy syncopations and cool hops with wicked glee. Siobhan Cook, Adriana Ray, and Tanya Rivard rattled taps in snappy, peppy synch during a Dot, Donna, and Teddy routine. Indeed, every dancer seemed as connected to the material as Rivard and apprentice Megan Davis were to each other while dancing a Holst Sisters number chained at the ankles. The charming retro stylings of Datri Bean & the Butter Bean Band, Allison Jaynes' period outfits, and Stephen Pruitt's footlights all splendidly set the mood, but bringing those dances back to life? That was Gray. Maybe her titles should also include reanimator? 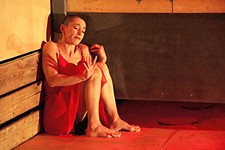