All Over Creation: Laugh Lines

A week of unexpected comic relief brought lessons in laugh-making

"If I can't sell it, I'll keep sittin' on it": Acia Gray in April Fools (Photo courtesy of Stephen Pruitt)

It's been a funny week – funny ha-ha, not funny peculiar.

Not that it was wholly unanticipated. When the period between Chronicle issues includes April Fool's Day, you rather expect shenanigans to shower down in some form. (This paper has been known on more than one occasion to note the day with a prank.) The performers of Tapestry Dance Company obliged me this past Sunday with their latest production, April Fools, which lived up to its name quite delightfully (see review, p.34). But quite by chance, the days on either side of it were filled to the brim with comedy. Much of my workweek was consumed with plotting the Chronicle's coverage of the upcoming Moontower Comedy and Oddity Festival. At the invitation of the Confidence Men, those adroit improvisers of mock Mamet plays, I had the opportunity to perform improv comedy before an audience for maybe the first time in 15 years. And I'd spent pretty much every free minute trying to channel Bob Newhart so as to do comedic justice to one of his classic stand-up routines for the April edition of the Dionysium on "Humour Theory" (an event which, sadly, will have already passed by the time this reaches print). Even the Austin Symphony Orchestra concert on Friday offered a moment of levity when cellist Bion Tsang followed his performance of Dvorák's Cello Concerto with a downright witty delivery of the composer's "Humoresque No. 7." Considering the weightiness of much of the artistic fare that I consumed in March – plays about cancer and the murder of Matthew Shepard, dances about cancer and the Holocaust – this week's experiences definitely qualified as comic relief.

I've always valued the therapeutic qualities of laughter – you'll get no argument from me on that "best medicine" claim – and that's partly why I take more pride in making someone LOL than almost anything else I do. But I'm also fascinated by what provokes laughter, and ever since I was a little shaver, I've not only howled at the great practicioners of comedy, I've also marveled at their craft and studied it to parse how it works. How can Buster Keaton be so hysterical when his face is devoid of expression? What makes Jack Benny's pauses more hilarious the longer they go on? What does Bud Abbott do as a straight man that makes Lou Costello funnier than he is by himself? (Ditto for Carl Reiner with Mel Brooks and Dick Smothers with brother Tom.) I took every film comedy, stage farce, television sketch, stand-up act, and comedy LP as a course in tickling funny bones, and my teachers were all top bananas: Keaton, Chaplin, W.C. Fields, Bert Lahr, Laurel and Hardy, Burns and Allen, Nichols and May, Jonathan Winters, Bill Cosby, George Carlin, Richard Pryor, Albert Brooks, Tom Lehrer, Spike Jones, the Marx Brothers, Firesign Theatre, Monty Python, the casts of Saturday Night Live and SCTV, any film by Christopher Guest, any film by Preston Sturges, Stan Freberg, Stephen Colbert ... I could list them for days. The point, though, is simply this: Every opportunity to laugh was an opportunity to learn, and that was no less true last week.

Acia Gray, Tapestry's artistic director and as gifted a hoofer as I ever hope to see, managed a comedic coup in her company's recent program, and all she did was stand in the spotlight and perform very simply a bawdy blues song from the Roaring Twenties. Now, the fact that she was in a shimmering scarlet gown and blond bouffant with a pencil mustache on her upper lip gave her look a comical spin. (The gender of Gray's character was purposely ambiguous.) And with the song being one long double entendre – wherein the sale of a chair is milked for every ounce of sexual suggestiveness – the lyrics did the heavy lifting as far as splitting the audience's sides went. Still, it wouldn't have worked nearly as well had it not been for Gray's deadpan delivery. It was the seriousness that she projected in speaking those salacious words that brought the funny. Then it struck me that the funniest moments in the previous night's Confidence Men show and in the Newhart routine I'd been listening to over and over came when whoever was speaking was most in earnest. It's just not as hilarious when the punch line comes with a wink and a poke in the ribs. The best comedians let the audience have all the fun while they stay deadly serious.

Serious is funny. Funny, that. 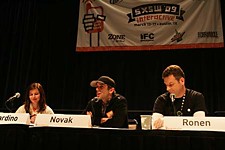