When you thought the love story well had run dry, up springs this irresistible new one 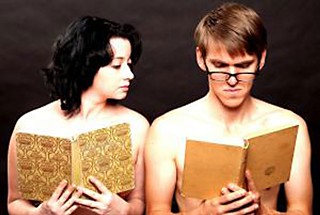 What's love got to do with it?: Devyn Ray (l) and Jesse Bertron (Photo courtesy of Will Hollis Snider)


The Schooling of Bento Bonchev is not your typical boy-meets-girl love story. And yet that's exactly what it is – boy meets girl, girl falls for boy, boy is oblivious to girl's affection, boy finally wises up, boy pursues girl, boy gets girl. As the lights dimmed, I smiled and sighed – in the end, love conquered all! But here's the catch: This love had to overcome more than familial disapproval or geographic separation. Most of the characters in Bento Bonchev are unable to feel love at all.

In a dazzling series of vignette-like flashes, contemporary Russian playwright Maksym Kurochkin thrusts us into a dystopian future in which love, sex, and jealousy have died out. Bento Bonchev, a grad student who studies the history of sexual behavior under the scholarly Professor Tirce, realizes that his mentor's life has been a waste: There is no incontrovertible proof that love once existed. Simultaneously, Bento's student Sandy is obviously head over heels for the handsome Bulgarian. But even after the worldwide, market-disrupting revival of love, both Bento and Sandy continue to deny love's existence – him on principle, her to win his heart – and somehow slip into happy matrimony.

The ensemble is as irresistible as the script and design, especially charismatic leading man Jesse Bertron, whose odd charm and quirky mannerisms suit Bento well. Devyn Ray gives a girlish bounce to Sandy and finds nuance in Sandy's absolute love for Bento. Joe Penrod channels the best and worst of academia for Professor Tirce, and Garry Peters and Chris Humphrey bring out their inner Jimmy and Tammy Faye Bakker as charlatan couple Frank and Emma. I left the theatre feeling joyful and energized, jamming to the Darkness' "I Believe in a Thing Called Love." If there's one story that will make even the most hard-hearted believe in that crazy little thing, The Schooling of Bento Bonchev is it.