New manager Emily Marks is thinking outside the temple 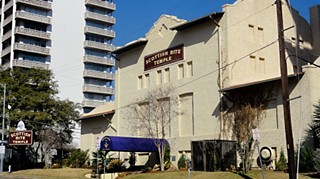 You'll be hearing a lot about Scottish Rite Theater in 2012 if Emily Marks has her way. The Girls Rock Camp Austin founder has recently made the leap over to the oldest operating theatre in the city, and she wants to pump that venerable space full of new energy and activity. That doesn't mean Marks is turning her back on children's theatre, which has made up most of the work on the SRT stage for the past seven years. After all, her previous job was all about connecting young people with creative outlets, and she isn't about to give up on that. She just wants to expand SRT's offerings to kids and their families and take it in some fresh directions, like, say, a play for youth directed by one of the Rude Mechanicals or a concert for the wee ones by Mother Falcon.

If the latter strikes you as blue-sky dreaming, then you'll just have to make your way over to 18th and Lavaca this Saturday at 1:30pm, when the Austin Music Award-winning band will indeed take the SRT stage to headline a family concert that also includes Les Rav and cartoons. It's part of the week's big kickoff to the new era of Scottish Rite. At 8pm that night, Mother Falcon will be back, along with Hello Wheels and the Altered Five, for a concert celebrating the national release of the band's debut album, Alhambra (see "SXSW Records," Music, March 18, 2011). But before either of those events comes PechaKucha Night Austin Vol. 13. On Thursday, Feb. 23, the fast-paced creative information series presents its first program of the year, which includes singer Kat Edmonson; writer and comedian Owen Egerton; artists Melissa Miller, Denise Prince, Faith Schexnayder, and Nancy Mims; band Total Unicorn; graphic designer Erin Mayes; art director Scott McAfee; and Marks herself, who, with Scottish Rite Mason Don Eames, will provide some background on the venue. The action starts, as always, at 8:20pm.

This is just the beginning, Marks promises. The next couple of months will include Graham Reynolds leading a concert reprise of his Duke Ellington remixes, Marmalakes (with a family matinee as well as an evening concert), and, during South by Southwest, a Deadbird Records showcase with Mother Falcon, Les Rav, the Silent Comedy, Marianne Dissard, Hellfire Social, Agent Ribbons, the Diamond Center, Seryn, the Sour Notes, the Silver Chords, and more. Beyond that, Marks is especially interested in bringing together artists who might not have worked together so they can have a chance to expand their creative horizons. And naturally, she's hot to have young artists – musicians, actors, writers, filmmakers, you name it – creating work in SRT. She's reinventing the 19th century opera house into a 21st century arts incubator. To keep up with what she's cooking there, visit www.scottishritetheater.org. 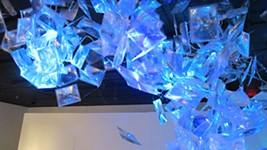 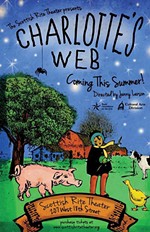