All Over Creation: Dispatch From the New Theatre Front

Nary a kitchen sink in sight.

After seeing all four productions in the current outing of UT New Theatre in the University of Texas Department of Theatre & Dance, this I can happily report. That rust-stained emblem of 20th century domestic drama and the onstage realism to which it stayed bolted like a fixture to a wall has not been installed in any of the 21st century theatrical structures erected here. Their architects – graduate student playwrights Tom Horan, Diana Grisanti, Holli Gipson, and Gabriel Jason Dean – have more on their minds than unpacking the baggage that parents and children have been lugging around the house for years. Not to be dismissive of family dramas – lord knows Eugene O'Neill and Tennessee Williams sure mined home front hostility for some potent plays, as have many of their successors – but such plays have dominated American theatre for so long that it often seems they're the default setting for this country's playwrights. That goes double for the younger ones who, encouraged to write what they know, know the most about their homes and all the head-butting, name-calling, repressed feelings, and closet-hidden skeletons there. So that's what goes down on the paper, then up on the stage.

Not so with Dean, Gipson, Grisanti, and Horan – at least not in the plays they're showing us here. Home and family may be present – indeed, Grisanti's River City is driven by a daughter's relationship with her father and his relationship with his father – but not so the home can serve as the arena for gladitorial combat among clan members. In River City, and also in Horan's Static, home is more like an archaeological dig where the protagonist sifts through obscure artifacts in an effort to uncover a hidden past. The two works echo each other in structure, each focused on a young woman who must sort through the belongings of someone that died and who then becomes obsessed with understanding the meaning of certain objects the dead person possessed. Scenes in the present alternate with scenes in the past that show the dead person's life and the place those objects had in them, and that builds to a point in which past and present intersect, with the young woman achieving some greater sense of both the dead person's identity and her own. The plays are quite different in tone and style. Static is very closed in, confined within the walls of this one house where the air is thick with mystery and loss; it feels haunted in every sense of the word, and it's easy to imagine someone cooped up in there for too long going mad. River City, on the other hand, is wide open, bouncing us around downtown Louisville, Ky., in the present and four decades past, with characters who are gregarious and quick to engage and frequently funny; we hear the city's heart beating along with the characters' and come to see its fate as being intertwined with theirs. Still, both plays convey a similar sense of the importance of history – how necessary it is to understanding who we are.

History also takes the spotlight in Gipson's The Chronicles of Bad Ass Women, in which we're introduced to an assortment of female outlaws who have kicked tail across Texas over the past century and a half. (One of them, I hasten to add, is played by my wife, Barbara Chisholm, who is serving as a professional guest artist on the show.) In sharing the stories of Sally Skull, Chapita Rodriguez, Etta Place, Bonnie Parker, and Janis Joplin, Gipson busts out of the home in drama much as these women busted out of their homes in life, showing us their battles against a society that just wanted its women locked up in domestic servitude. They wouldn't have it, and they look us square in the eye to tell us so – busting down the fourth wall, to boot. Those who defy authority, who break the rules, aren't always remembered, but we can't afford to lose their stories, either.

Dean's Bacha Bazi (The Boy Play) is very much of the present, and all-male instead of all-female, but it shares with Bad Ass Women a concern with cultural repression. The boys in it are prepubescent Afghanis who are forced to dress in women's clothing and dance for men, who then bid for the chance to have sex with them. An American filmmaker seeks to expose the practice through a documentary and coerces a young dancer into discussing his life on camera. The play doesn't just take us out of the home but sends us half a world away into another culture, where we're forced to confront deeply ingrained cultural attitudes, exploitative behaviors, and justifications on both the Afghan and American sides, as well as the consequences of our interventionalist impulses, however well-intentioned. The play asks a number of big questions, as do all of this year's UTNT plays: questions about identity, about race, about culture, about traditions, about history, and yes, about family, too. This is an ambitious group of plays that way, and while I wouldn't say that they've realized their ambitions fully here, I've been excited and impressed by their attempts. It speaks well of this generation of playwrights that they're thinking big – and that they know how good it can be to get out of the house. 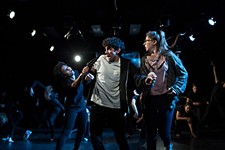 All Over Creation: Nativity
A new musical by the 'Urinetown' team is born on the 40 Acres, and the chorus line craves bra-a-ains