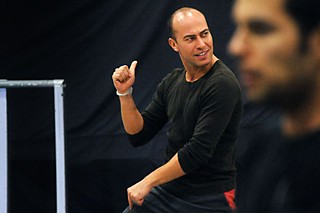 What's at first striking in a rehearsal of Bradley Shelver's work for Ballet Austin's New American Talent/Dance competition is the pairing of dancers Christopher Swaim and Michael Burfield. While there's no disputing their talent and hard work, neither evokes the platonic ideal of the danseur. Swaim is tall and lanky, with very lean musculature, but lyrical and versatile. Burfield has a nice line and wonderfully long legs, but he's on the smallish side, as male physiques go. In classical works, these men are likely to be typecast in secondary roles – Swaim as the villain or king, Burfield as the court jester. In contemporary works, at times they both seem forced, from different angles, into a nondescript middle ground. In Shelver's dance, however, these men seem to be paired such that their idiosyncrasies embrace each other. To elicit a particular connection between them in the abstract piece, Shelver asks them to consider the relationship between Jesus and Judas. "We'll never get the conversations they had," he tells the dancers, but that level of intimacy between men is what he wants to explore. To choral music (Ballet Austin is withholding details about the final music choices until the competition), Swaim and Burfield lift and move one another, head in hand, body over body, lunge over arm. When a too-powerful stance is taken, Shelver stops them. The point of the duet – and the choreography that he maintains is "exceptionally simple" – is to focus on the personal connection.

Shelver, a New Zealander who moved to New York in 1998 to study at the Ailey School, directs his own New York–based company, and dances, choreographs, and teaches worldwide. It's arguable that his artistic genetics are not that different from those of the other two competitors, Loni Landon and Gregory Dolbashian; together, the three choreographers' bios read like a what's what of New York dance: Ailey, Morris, Lubovitch, Jones/Zane, Juilliard. But Landon and Dolbashian, both born-and-raised New Yorkers, actually work together in New York where they run the Playground, a program connecting experimenting choreographers with willing professional dancers. The jurors who chose the three from 10 semifinalists in a blind evaluation (after a Ballet Austin team culled from a slush pile of more than 50 entrants) are accomplished professionals in choreography, dance, and dance education from Quebec, California, and Chicago. So, whether the three finalists are representative of a New York stronghold in choreography or their shared hometown is coincidental, they've legitimately proven themselves to be at the top of their game.

In Shelver's work to date, evidenced by his dance company's YouTube channel (www.youtube.com/user/BSCDT/videos), historical themes are not new; he's explored ancient gatherings and medieval rituals. In his tweaking and repurposing truths about humanity to create societies and rituals, and also in his music choices, he has something in common with NAT/D 2010 winner Nelly van Bommel (the jury declared a tie between her and Dominic Walsh). If Shelver's NAT/D dance, for seven men in total, lives up to the energy and power of some of his previous work, it could be an exciting performance for audiences and an empowering experience for Ballet Austin's male corps – if they are up to it.

The other choreographers have equal potential to make great work. Landon attended the New York City High School for the Performing Arts and Juilliard and danced with Ballet Theatre Munich for two years. In Europe, the inclusion of "ballet" in a dance company's name doesn't necessarily correlate with a repertoire of classics, and Landon brushed elbows with a slew of contemporary choreographers. She's been making dancers ever since – that is, when she's not dancing with the Metropolitan Opera, teaching, or running the Playground. Landon's work on video and in rehearsal comes across as poignant, sensitive, and reaching, with precious music choices – think the gall of Fame with the consideration of a poet. I revisited several times one moment in a video of her 2011 piece "on the fence" (www.vimeo.com/20884801): a dancer runs upstage with her back to the audience and extends one leg to the side, the toe drawing an arc to an arabesque in the back. The arms stretch behind her, too, so the extended toe nearly touches the fingers of the opposite hand.

Landon's casting choices for the competition seem to indicate that her NAT/D piece will embody a similar quality: Oren Porterfield, Ashley Lynn Gilfix, and Jamie Lynn Witts, the women in the company who have the most refined feminine qualities (as opposed to a more athletic, contemporary look) will dance with a trio of men. In rehearsal at Ballet Austin, Landon focused on the nuts and bolts of a complex grappling sequence for the male trio. Once they had untangled, a lovely vignette surfaced, and here I recognized the aesthetic sensitivity from her work to date. When Witts joined the men, she asked Landon about the manner in which they should walk. "You're not sure what's coming," explained Landon; the mood is quietly anxious, mysterious, suspenseful. Yet after some pretzel-y floorwork and more discussion of the mood – Swaim might evoke a scientist, Landon says; "mixing chemicals," Swaim offers – Landon announces a shift: "I want everybody to move like badasses."

Dolbashian and Landon are a couple in both life and career, so it follows that some of their experiences parallel: Besides their work at the Playground, both have won the Northwest Dance Project's Pretty Creatives competition and CityDance's Next commission, and both have shown work at Jacob's Pillow Dance Festival. But Dolbashian, who as a child toured the world in a 1990s revival of Einstein on the Beach, trained at the Ailey School and SUNY-Purchase. In videos of performances by his company, the Dash Ensemble (www.youtube.com/user/MrDolbashian/videos), his work is tough-soft with an athletic bent – there's not necessarily a lot of jumping and running, but the movement quality has a lot of muscle behind it, with lightning-quick shifts from attack to blood-pumping stillness.

At Ballet Austin, Dolbashian cast the three women with the most athletic qualities – Michelle Thompson, Beth Terwilleger, and Chelsea Marie Renner – along with Frank Shott and Burfield. Despite the versatility of these dancers, it's a tough challenge to leave behind all of ballet's affectation in favor of Dolbashian's natural, street-inspired style. Nevertheless, he's worked with ballet-trained dancers before. After observing the five dancers as they ebbed and pulsed around a center point, Dolbashian demonstrated the quality of a pause in which the dancers peer under a rounded arm; the dancers emulated his pace and breath. In Dolbashian's as well as Landon's work, the footwear of choice is usually black socks. Fashion faux pas or nerd-cool argument aside, socks make the footwork softer and quieter than even ballet slippers or bare feet. Plus, it allows the dancers – Dolbashian likes to include this – to slide across the floor on flat feet, like a kid down a freshly polished hallway floor.

As a whole, these experienced, developed, distinct choreographic voices suggest a performance well worth seeing, for balletgoers but also – maybe especially – for members and fans of the local independent dance scene. It's likely to be very different from NAT/D 2010, in which two out of the three finalists – and the top winners of both the jurors' and the audience's awards – incorporated humor and even doses of silliness (remember those argyle socks and braids that stood up on their own?). This year, the presiding tone is likely to be moodier. While all three choreographers insist that the time, tools, and dancers that enable them to make a new piece are the point, not the final ranking in competition – says Landon, "I honestly feel like I have already won" – someone will have to come out on top. And I peg that someone – in truth, it could be any of the three – to be the person who is most able to differentiate himself or herself by showing us, in 20 minutes, a succinct voice.

New American Talent / Dance
Not everyone agreed with the clear winner in Ballet Austin's competition this year, and enough with the tweets