An afterimage for an afterworld 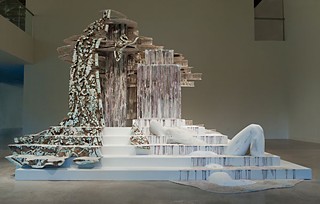 The most startling aspect of Diana Al-Hadid's most recent sculpture Suspended After Image, now installed in the Vaulted Gallery at the University of Texas' Visual Arts Center, is its ability to disappear. Built in a formal language years in the making (puddles, drips, pedestals, steps), it at first seems impossible that masses of gypsum and plaster could be supported by flat planes of dried paint drips. From certain vantage points, these seemingly immaterial drip planes cohere into a solid-gray, muddy mass. Walk five steps, and the negative space is suddenly showcased, and the once-heavy sculpture now taking on all the weightiness of the most basic of dog crates, coming close to disappearing. This was all thoughtfully planned by Al-Hadid, who digitally rendered the installation before building it, considering the various vantage points a viewer might see her work from. While the forms may have been planned and the images manipulated digitally, the swipes and sweeps of the artist's hand are evident at every vexing intersection.

The Vaulted Gallery is ideal for large-scale sculptural installations like Al-Hadid's – the space that serves as the VAC's entrance used to be hemmed in by drop-ceilings and awkward stairwells back when the Blanton Museum of Art was its primary tenant. Since then, a massive renovation revealed Louis Kahn-like cement vaults, transforming the humdrum institutional space into one that artists should be envious of, as well as awed and intimidated by. Previous installations by Amanda Ross-Ho, Ry Rocklen, and Mika Tajima all took up the challenge, admirably resulting in the creation of an art-materials factory, a set of strange carpet sculptures, and an homage to the poetics of refusal known as "slacking," respectively. These young artists – certainly Al-Hadid fits the same bill – all spent time creating their works in situ, employing and interacting with art students at UT.

When I was a kid, I would go on class field trips to see the Huntington Collection on the other side of the more-than-Forty Acres. I would stare incessantly at the plaster casts of Classical Greek and Roman sculptures, themselves products of 19th century models of art education. Over the past few years, classic figural representation has crept into Al-Hadid's work, making its appearance in this particular context supercharged. Here, a figure in repose langorously lies embedded in the stepped foundation of Al-Hadid's sculpture. Perhaps unsurprisingly headless, this male body is more topographical than narrative. The top of a shoulder becomes a subtle mound akin to an ablating glacier, disconnected from the rest of the body. The handmade is here, too; though the human form is cast or mechanically built up, it is also worked over by Al-Hadid. Delicate rubbed halfmoons of once-wet plaster cup under the pectorals, making this very classical male look like a post-op female-to-male.

Another notable element is what appears to be a large waterfall but is, in fact, based on a representation of a cloak from a Gothic painting Al-Hadid encountered at the Prado in Spain. What exactly the painting, was titled or who made it is still unknown to the artist, and truthfully, it doesn't matter. The image of the cloak became a form for her to obsess over, and by purposefully limiting her access to information, she deepened the mystery as well as the stakes and desire to imagine it again.

This is a world we should live in for a spell: a place where a cloak ignites desire; architecture transforms into paint, which sometimes evaporates into immaterial form; and the divide between digital and handcrafted isn't so wide at all – an afterimage for an afterworld.

"Diana Al-Hadid: Suspended After Image" is on view through March 10 at the UT Visual Arts Center, 23rd & Trinity. For more information, visit www.utvac.org.