A magnificent-looking and intelligent staging of Tom Stoppard's masterpiece 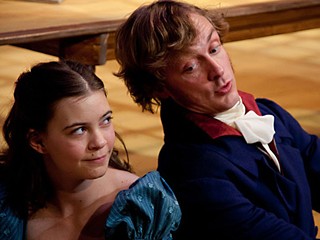 Who's schooling whom: Georgia McLeland and Collin Bjork (Photo courtesy of Kimberley Mead)


What have rice pudding, dahlias, and tortoises to do with Arcadia, that unattainable pastoral paradise?

Tom Stoppard, in his 1993 masterpiece Arcadia, weaves these seemingly irrelevant objects together into a chillingly beautiful kaleidoscope in which physics, mathematics, sex, literature, history, and landscape gardening merge to create tantalizing, ephemeral action. Here, the famously inventive mind behind the absurdist Hamlet inversion Rosencrantz and Guildenstern Are Dead sets up a pair of parallel plots in the same Derbyshire, England, country house that take place 200 years apart. In 1809, the shrewd Septimus Hodge (Collin Bjork), tutor to precocious aristocratic teen Thomasina (newcomer Georgia McLeland), is found in "carnal embrace" with a married woman in the gazebo, which will soon be transformed into a picturesque hermitage, and the scandal sets off a chain of events that changes the lives of the Sidley Park residents forever. In the modern day, blunt writer Hannah Jarvis (Liz Beckham) seeks the identity of the mysterious Sidley Park hermit alongside postgraduate mathematician Valentine (Philip Kreyche) and uppity academic Bernard Nightingale (Shelby Davenport), who has discovered a tenuous connection between Septimus and the romantic poet Lord Byron.

This Austin Shakespeare production certainly looks magnificent, with jaw-dropping scenic design by Ia Ensterä and equally spectacular lighting by Jason Amato. Justin Cox expertly supplies the able cast with mountains of period props, and vocal coach Nancy Eyermann generally has everyone speaking in convincing British accents. The modern-day ensemble is stronger than the 1809 group, with superior and intelligent performances from Beckham, Kreyche, and Davenport, but Bjork and McLeland capture the audience's hearts with their tender tutor-pupil relationship.

Director Ann Ciccolella and indispensable dramaturge Julie B. Jones make a notable effort to keep the audience afloat on Stoppard's sea of obscure references and nuanced plot twists. For example, in 1809, the butler Jellaby (Steve Cruz) emphasizes, with a thoughtful pause and roll of the tongue, the delightful rice pudding awaiting Thomasina. The girl's subsequent observations on this dessert are a crucial impetus for her primitive discovery of the Second Law of Thermodynamics later in the play. But this careful attention is discarded at the play's glorious, climactic ending, a moment of fleeting beauty in the face of a devastating impending tragedy (which I shan't spoil – go see the play!). Ciccolella believes audiences will find that the conclusion of her company's production "isn't as sad as usual," but by downplaying Arcadia's tragedy, the production does the play a disservice. As Nicholas Poussin's famed painting proclaims, Et in Arcadia ego – even in Arcadia, I am there – even in utopia, death is present. But that's no matter, really. As Valentine says, "It's all trivial anyway."