Ancient voices, singing strings, and lots of Bach made 2011 a fine year for ears 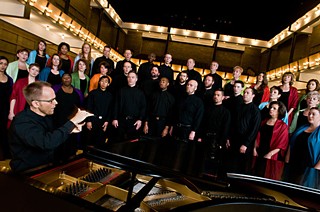 1) 'RENAISSANCE & RESPONSE: POLYPHONY THEN & NOW' (Conspirare) This breathtaking survey of early choral music in four concerts over three days was a massive challenge for Craig Hella Johnson's singers, but their voices showed no strain, only an ethereal unity and reverence that sounded centuries old.

2) 'FLIGHT' (Austin Lyric Opera) The travelers in Jonathan Dove's airport-set opera may be earthbound, but ALO's production took wing, its portrait of lives in transit interrupted by turns delightfully comic and lyrically poignant.

3) AUSTIN SYMPHONY ORCHESTRA WITH JOSHUA BELL (ASO) The symphony at play with a mockingbird, for when violinist Bell puts bow to strings, his song is as pure, lively, and masterful as the mocker's. The most astonishing sound all year.

5) ROSSINI: 'PETITE MESSE SOLENNELLE' (Austin Civic Chorus) No sober, bloodless Teutonic mass this, but rather a lusty Italian one, brimming with operatic drama and passion; Ryan Heller's choir and soloists made you feel the blood's pulse and heat.

6) 'OUT OF THE BACH'S' (Austin Chamber Music Center) This pairing of pianist Michelle Schumann and vibraphonist Graeme Francis bouncing between vintage Bach and composers inspired by him was inspired, with the piece from Keith Jarrett's Köln Concert absolutely melting me.

7) 'GOLDEN HORNET PROJECT PERCUSSION VII' (GHP) Restless experimenters Graham Reynolds and Peter Stopschinski at their mad-scientist best, cooking up new rhythms and sounds with anything they could pound. Yeah, they got the beat.

8) 'BACH'S HERD OF HARPSICHORDS' (La Follia) Keith Womer and his trio of collaborators not only revealed the variety of this early keyboard instrument, but with a little help from J.S. Bach, they seduced you with its sounds.

9) (TIE) 'SAMUEL BARBER: AMERICAN ROMANTIC'/'FROM THE BRITISH ISLES' (Conspirare) The great chorus covered both sides of the Atlantic this fall with the chamber choir shining a mighty light on Barber's gentle darkness and the youth choirs and symphonic choir's men bringing thundering majesty and sweet spirit to British hymns and folk songs.

10) ANTON NEL, PIANO, WITH MARTIN BURKE, ACTOR (Butler School of Music) The keyboard master at his most commanding, thundering out Beethoven and Debussy, and at his most whimsical, dancing through Poulenc's sketches of Babar as the irrepressible Burke narrated his elephantine tale.