Though touching, this homespun production was inconsistent 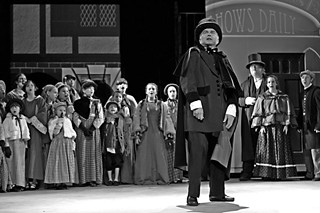 
In last week's Sunday funnies, a cartoon of Marley's ghost mistakes the comic strip's protagonist for Ebenezer Scrooge. The bespectacled man remarks in exasperation, "All I said was that if I had to watch one more adaptation of Dickens' A Christmas Carol, my head would explode!"

I must admit that he has a point. Since its publication in 1843, Dickens' tale of the miserly, "bah, humbug" grumbling Scrooge and his late-night visitations from the ghosts of Christmas Past, Present, and Yet To Come has seen umpteen adaptations. The musical onstage now at the Georgetown Palace Theatre has a score by Alan Menken of Nineties Disney movie acclaim, lyrics by Tony Award-winner Lynn Ahrens, and a book by Ahrens and Mike Ockrent. Succinct and well-rounded, it balances the corny (a macabre song-and-dance number with a host of chain-wearing spirits join Marley's ghost to haunt Scrooge into reformation) and the sweetly sentimental (a few heart-melting bars sung by precious Tiny Tim).

But this Christmas Carol is also a doozy, with big Broadway ensemble numbers; countless transitions between the snowy streets of London, Scrooge's bedroom, and more; and a cast of nearly 45 adults, teens, and children (and those are just half of the actors involved – the show is double-cast). I commend the Palace, a nonprofit organization with robust community support, for mounting this enormous undertaking with contagious enthusiasm. Watching the high-energy, well-choreographed "Mr. Fezziwig's Annual Christmas Ball," the best scene in the production, I couldn't help but grin.

Though this homespun production was touching, it upheld my colleague Adam Roberts' assessment of Palace shows as inconsistent in quality. The company may have grown in this summer's excellent Dirty Rotten Scoundrels, but A Christmas Carol suffers from problems with diction, British dialect, and sound balance that make the actors difficult to understand; fog effects that leave the audience coughing; and recurring issues with vocal pitch and blend. The transitions are surprisingly fluid, with cast members manipulating several wheeled flats into various configurations onto which background images are projected, creating a cost-effective if slightly cheesy solution to the show's many set changes. Though the cast struggled with illnesses the evening I attended, they kept up with the recorded accompaniment and were obviously having fun, led by Christmas Ghosts Jared Hill, Wendy Jo Cox, and Jessica Smart, who were among the best performers. As Scrooge, Larry Oubre boasted strong vocals but fell short of the emotional range needed to become Dickens' "squeezing, wrenching, grasping, scraping, clutching, covetous old sinner."

My head certainly didn't explode after seeing this cute Christmas Carol, but I think the stage at the Palace Theatre has seen better productions. I look forward to returning to Georgetown later this season to see what else the Palace has to offer.