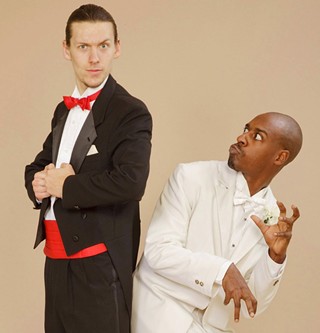 
Just before it begins snowing indoors, Ms. Bon Marché, young Clara's enchanting, dance-diva auntie, proclaims, "You never know what's going to happen in your living room on Christmas Eve." As usual, Tapestry director Acia Gray is commanding, and I almost buy it. But even magic needs its own logic, and at times Of Mice & Music – A Jazz Nutcracker seems to forgo logic in favor of alignment with The Nutcracker. Nevertheless, it's danced to live, jazzed-up arrangements of the Tchaikovsky score by the band Blue J and has appeal for both Nut-lovers and those who have sworn off sugarplums.

As with many versions of The Nutcracker, the cast includes lots of children. But Of Mice & Music takes the inclusive spirit further by showcasing not just teenagers and tots but also members of Tapestry II, a performing group of adult students. As party guests wearing tacky Christmas sweaters, these nonprofessional women, diverse in age, not only fill the ranks but also add depth. On opening night, some looked nervous, but they filled out the back row. The ones in front smiled and glowed, seeming to enjoy themselves immensely.

As the Drosselmeyer figure, Ms. Bon Marché presents Clara, danced by the luminous Hannah Yeo, with a pair of tap shoes and an array of dancing dolls, which include the regional-gastronomical-themed avatars of The Nutcracker divertissement along with the Nutcracker itself. The tiny mice in leotards and tie-top tap shoes and the slightly older ones in dapper coats and hats were well rehearsed. Scrambling and pawing, they obediently (and adorably) followed company member Travis Knights as the slinking, cartoonish Rat King. Since there's no love story between Clara and the Nutcracker (the role was shared by the injured Thomas Wadelton and understudy Jeff Olson), the old Nut's only claim to importance is defeating the Rat King in a tap challenge. But everyone knows that Clara, her aunt, and her mom could have smacked that rat themselves.

Following snow in the living room, the rest of Clara's new dolls become animated – though to varying degrees. Siobhan Cook, often electric and exuberant, seemed cast against type in a ballet-inspired cliché of the Arabian dance; "Spanish," a tap solo for Adriana Ray, also lacked luster. The floor work in Jacqueline Coleman's "Chinese" was just this side of engaging, but in "Russian" and "Marzipan," Matt Shields and Tanya Rivard became real characters thanks to development beyond, or at least a dive into, the flat cultural stereotypes and Nutcracker archetypes.

In a plot that wraps almost everything up nicely, the edgy and benevolent Bon Marché wraps up the divertissement, bestowing on Clara that ultimate symbol of divaness, her feather boa. And that's the end, because with tap shoes and a boa, a girl doesn't need a prince, let alone a stodgy old nutcracker.