All Over Creation: Regifting

There may be new life in old Scrooge yet, thanks to creative Austin artists

Don't humbug the humbug: Bernadette Nason as you know who (Photo courtesy of Christopher Loveless)

Scrooge is dead to you. I get it.

Not the way that Marley was dead (to begin with). Not dead as a doornail, in a pine box. Dead as a token of yuletide cheer, dead as a dramatic character with any power to put you in the spirit of the season. Like the obnoxious uncle who shows up on your doorstep every December and always overstays his welcome, Scrooge is there every Christmas, everywhere you turn: at the theatre, the movies, on TV, in every body imaginable, from Patrick Stewart to Yosemite Sam, Kelsey Grammer, Jim Carrey, Bill Murray, Susan Lucci, Mr. Magoo. Because his incarnations are legion and in such heavy rotation (how many times are you gonna show that George C. Scott version, AMC? You're not helping), the old tightwad's as inescapable as those cheesy Christmas carol covers blasted through every retail outlet in the nation from Halloween onward.

I feel your pain. In my line of work, schmoozing with Scrooge is an occupational hazard. Write about the arts, and you can bank on seeing him many times – along with those other holiday evergreens, The Nutcracker and Handel's Messiah. Now, I myself have a high threshold for Ebenezer exposure; I can sit through his story repeatedly with no adverse effect on my appetite for it. But I certainly understand those who are so stuffed to the gills with Scrooge, they feel like geese being force-fed spiritual reformation to produce some inspirational holiday pâté. So I can't in good conscience ask folks to subject themselves to one more serving of skinflint pudding any more than I can make a case for another spin of the Ray Conniff Singers crooning "The Little Drummer Boy."

That said, you know how good Austinites are at repurposing worn-out goods, right? How people here have a knack for taking objects that have outlived their time or usefulness and, with a creative tweak, giving them second lives? Well, our citizens are as artful at doing that with tired yuletide classics as with vintage clothing and kitschy housewares. I was reminded of this again on seeing what Rupert Reyes and Teatro Vivo have done with Scrooge in Cuento Navideña; their shifting of time, culture, and gender brought fresh perspectives to the old miser (see review). And they're not alone. Popworks Cooperative is working up a new Carol similarly of our time and town with an all-star cast led by Robert Pierson as Scrooge (Dec. 16-17, the Off Shoot). Actor Alex Garza is refracting Ebenezer's saga (and George Bailey's?) through his familia in his one-man show, Abuelita's Christmas Carol (Dec. 19-21, City Theatre). And two actors are embodying not just Scrooge but everyone in Dickens' Carol in separate solo adaptations: Bernadette Nason's (Dec. 15-18, City Theatre) and Damien Gillen's (Dec. 19, Dougherty Arts Center).

The same goes for those other seasonal staples. Ballet Austin provides an exquisitely sweet traditional version of The Nutcracker (through Dec. 23), but Tapestry Dance Company has cooked up a jazzier flavor with Of Mice & Music – A Jazz Nutcracker (see review). Likewise, the Austin Symphony always serves a grand Messiah with full orchestra and choir, but when you feel like joining the "Hallelujah Chorus," Austin Civic Chorus lets you – and everyone – sing along, and this year, new professional chorus Ensemble VIII gives the baroque oratorio a new, old spin with the score played on period instruments (Dec. 16-17, St. Louis Catholic Church). All over town, artists are taking the familiar offerings of the season and sprucing them up in new boxes with fresh ribbon. It's a kind of regifting, a swap of something we don't want for something we do.

Scrooge was all about getting a second chance. Maybe this will persuade you to give his tale – or The Nutcracker or Messiah – a second chance, too. Now, if the Rude Mechanicals would deliver that Nutcracker they were gonna make .... 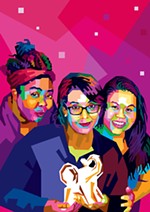