Alvin Rangel's future may be uncertain, but for now he's making great dance I first saw Alvin Rangel dance in May 2010. A minute or two into the piece, "Mapping Desire" by Holly Williams, I felt the relief mixed with excitement that occurs when you realize that your experience as an audience member is in the hands of a proficient, capable performer, one who can take you places. Physically, he was muscular, powerful, and well-proportioned, with graceful lines. Technically, he could move: His training in ballet and jazz was the foundation for powerful contemporary movement. And as a person in space onstage, he was commanding yet a team player. And he was a he!

The context of my surprise was the Austin contemporary dance scene. To be clear, I'm not talking about Ballet Austin; the ballet's problems with attracting male dancers who are technically adequate as well as physically proportionate, strong, and charismatic warrant a separate discussion. And I'm not talking about Tapestry Dance Company, which seems to have a constant supply of fierce male hoofers. I'm also not talking about Latin dance, which has formidable leaders and, at times, passionate disciples.

I'm talking about contemporary dance. Local performances in this genre often lack men entirely or feature men with too little training, maturity, zeal, or taste to be taken seriously. In my four years of watching local contemporary dance (not to say I haven't missed a few shows), only Steve Ochoa has caught my interest as a serious, recurring performer with technique, beauty, and depth. Choreographers from David Justin to Gina Patterson have imported talent to fill male roles in their work. Rangel himself is hiring an out-of-towner as his dance partner for his thesis concert in March 2012 – but more about that later. First things first: Who is Alvin Rangel?

A native Puerto Rican, Rangel grew up studying ballet and jazz. He joined the Dayton Contemporary Dance Company, an unexpected Ohio haven for high-caliber dancers, especially those of color, and remained there for nearly a decade. After returning to Puerto Rico to complete a bachelor's degree in education, he was offered a job teaching middle school English as a second language and Spanish at a Houston public school. He was also offered a job in New York City, but he was afraid a teacher's salary wouldn't go far enough there, and he didn't want to share an apartment with 10 other people. In Houston, he bought a house.

He never left the dance world completely, though, and a few years after settling in Houston, Rangel's focus turned to Master of Fine Arts programs, with the ultimate goal of in-depth work on his pet subject, queer tango, and teaching at the college level. Now in his final year at the University of Texas, audiences may be just beginning to know him, but it's likely that he'll soon be leaving town to fill a faculty position elsewhere. So if you haven't found yourself in Rangel's audience yet, you may have just two chances left, and one of them is happening right now.

Rangel is currently rehearsing, as both a choreographer and a performer, for the Department of Theatre & Dance's fall showcase Dec. 2 and 3. He will dance a solo by faculty member David Justin, just one in a string of choreographers, including Alvin Ailey, who have been inspired by composer Ralph Vaughan Williams' The Lark Ascending. Justin created the piece during his years at the Birmingham Royal Ballet and approached Rangel about reviving it, accompanied live by a string trio and piano playing a chamber version of the orchestral work. What's the dance about? "It's about ... I really don't care what the choreographer says it's about!" Rangel jests. But seriously: "For me, there's always the choreographer's story, and I try to honor that idea, but as a performer, I need to think of my own story." He says the solo suggests "a sense of wanting to be free, to soar," and into the solo's aspiring mood Rangel adds his feelings about being so close to accomplishing his degree requirements. But the euphoria is tinged with the fear of the unknown. After graduation, Rangel says, "I don't know where I will end up."

What to do when the future is uncertain? Seize the day! Which Rangel does in his choreographic contribution to the showcase, "Carpe Diem," set to a composition by Antonio Caldera. The sextet is inspired by all things Baroque, which became an obsession when he visited Italy last year. Fascinated with the period's culture and the uncanny sense of movement in the sculpture, Rangel strived to embody and play off the style. In Baroque music, he hears a subtext of parallel aspirations: Composers used commissions by the church as vehicles to make huge developments in tonality, instrumentation, and notation. "Carpe Diem" is a revised version of a piece he had planned to show – and dance in – a year ago but was thwarted by an ankle injury. In retrospect, he's thankful for the delay. Some of the original cast members graduated, causing him to rethink the groupings and eventually take himself out of the piece, which allowed him to make more effective revisions and edits.

However, when Rangel shows his thesis project in March, he will dance in his own work. The dance for two men, to live accompaniment by the Austin Piazzolla Quintet, will consider gender roles in traditional Argentinean tango and use contemporary dance to propagate tango steps. So how does the leading and following work? Does one person identify as the leader or is there a gray area? "I'm definitely going into the gray area," he says. Because tango requires maturity and power from both partners, regardless of gender – tango's intensity and drama is sometimes called a "three-minute relationship" – Rangel is flying in Ricardo Garcia, a former colleague at the Dayton company, to be his dance partner. Two fierce male dancers onstage at once? Mark your calendar. 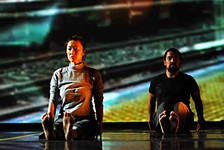 3: MFA Dance Concert
The work of these grad student dancemakers was as individual as it was thoughtful