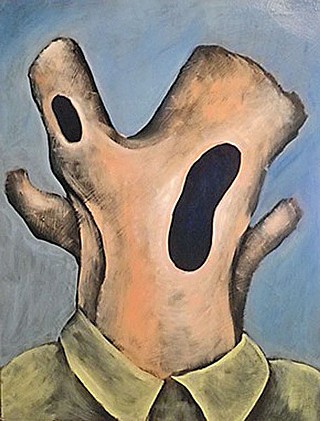 A painting by Stephen W. Schwake


It ain't all EAST right now, hon, OK? There are other galleries in this half-naked city, you know, and while "West of East," the current show at Gallery Black Lagoon, is a mixed bag of goods, we want to point out a thing or two in that space next door to the Parlor in Hyde Park.

Walk on in and glance at what's on the walls in the front. Much of it, especially if your vision is nigh unto jaded due to frequent viewing of graphic work, will provoke your "meh" response. Some of it, though, like the intricate narrative pen-and-inks of Katie Rose Pipkin, will make you yearn to know the stories behind the depicted scenes. Some kind of Gormenghast vibe working in there, it looks like.

Halfway into the gallery, there's David Lujan's huge rendering of a bee, and that's a definite note of interest. The image itself is lovely, yes, but the method of reproduction is what marks this as serious goodness: screenprinted, as so many things are, but screenprinted on birch, using gum arabic pigments and transparent base. Thus: as delicate, colorwise, as it is large, and rendered as if with traces of the insect's own honey.

But don't stop there. It's not that big of a gallery – your energy won't be depleted, and besides, you can always grab a slice of hot pizza at the Parlor when you leave. So keep going to the end. On the final wall you'll see, to the left, a brace of paintings by Stephen W. Schwake. Schwake works the figurative surrealism mode in oils, his sometimes cartoonish subjects reined in by solid technique to produce shadowed beauties of symbolism. Imagine: The New Yorker's Owen Smith repainting the creepier parts of Michael Sieben's oeuvre? Yeah. Good times, Gallery Black Lagoon.