All Over Creation: For Those Who Took Us In 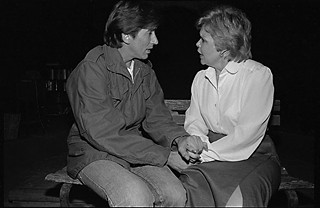 She was as generous as actors come, onstage and off. When you played a scene with her, she gave you her full focus, as if whatever you had to say was far more important than anything she might utter. And no matter how insipid the line or how poor your delivery, she received it as openly as the heartfelt declaration of a trusted friend. And that didn't change when the curtain came down and the cast inevitably headed off to some watering hole. She talked to you and laughed with you and included you as though you'd been a part of the gang always, as though you belonged.

That makes a difference when you're 23 years old and it's only your third show in town and you're stepping into a role that another actor had filled for the first few weeks of rehearsal and everyone else had already bonded with him in that way that casts do. Then, you feel on the outside of things in so many ways, and to be welcomed into the fold and treated like a peer is such a gift. She not only made that gesture, she made you feel that you were better than you were, that you were worthy of sharing a stage with someone as experienced and talented as she was.

And oh heavens, she was talented. She was, I think, the first actor I knew who could truly tap that well of feeling deep inside, the place of greatest vulnerability; she could open her mouth and open a vein, raw emotion pouring from her. She played flinty nuns and flighty Southern belles, Irish drudges and Texas floozies, all with equal conviction. There was a spark within her – that flame of vivacity some folks are blessed with – that would animate any characters she played. They had vitality because she had vitality, an uncommon liveliness of spirit that made you want to work with her and be around her.

Her name was Scottie Wilkison, and she died Nov. 5 at age 77. I was fortunate enough to share the stage with her in five productions in the Eighties. By the time I came along, she was a mainstay of the theatre scene – University of Texas Department of Drama, class of '57! – with credits on pretty much every stage in town and a shelf full of accolades. In the first seven years of the B. Iden Payne Awards, she earned five prizes for her acting, and she and her husband, Gordon, were among the first recipients of the Austin Circle of Theaters' Special Recognition Award for outstanding contributions to local theatre. I don't know the number of times those two opened their hearts, home, and checkbook for the riffraff of Austin's playhouses, but I suspect it's roughly the same as the stars in the Texas sky.

It was a different time. Austin was less than half the size it is today, and the work on its stages almost entirely community theatre. That isn't to say it lacked for quality – it didn't – but there was a spirit infusing the theatre that isn't seen in Austin much now, though it still thrives in the towns around us. Community theatres are driven by the participants' love for what they do, and, as the name says, the shows are made by the community for the community. The sense of shared participation – of the theatremakers' relationships to one another and to the audience – exceeds what I've experienced in any other kind of theatre. Scottie was of a generation for whom that was the norm, and it wasn't the only reason she gave as much as she did – no, her generosity was ingrained in her – but I believe it helped shape her welcoming spirit in the theatre.

I'm older today than Scottie was when we first worked together at the Zachary Scott Theatre Center on The Little Foxes (along with a very young Mary-Louise Parker), so when I work with young actors now, I can't help but think about the opportunity I have to extend a welcoming hand to them as she did to me and others my age. I strive to follow the example set by her and others of her generation: Mavourneen Dwyer, Mac and Frances Mauldin, Boyd Vance, Pete Calhoun, John Martin, Charles Hill, and so many more. Their names may not be familiar any longer, but they made their mark and gave me a connection to this community that I still treasure. With Thanksgiving approaching, I express my gratitude to them and ask that you raise a glass to those in your life who took you in and made you feel that you belonged.