"When I started crossing Interstate 35 into East Austin, I went there to be an outsider in my own city." So writes photographer John Langmore in the introduction to his series "Fault Line: A Portrait of East Austin." It was a part of town he knew only for its reputation west of the I-35 divide as a place to be avoided. But Langmore didn't need to make too many trips into the 20 square blocks in the heart of East Austin to lose his preconceived ideas about the neighborhood and discover its "palpable sense of community." In this year's East Austin Studio Tour, he's showing images from that 2009 series in the community where they were made. Langmore discussed the series in an email interview.

Austin Chronicle: You talk about going into East Austin as an outsider. When did you cross the line into not feeling like an outsider?

John Langmore: I never stopped being or feeling like an outsider. Virtually everything about me makes me an outsider to the community I photographed. Instead of trying to act as though I was part of that community, I simply tried to express the sincerity with which I was trying to understand and, most importantly, tell their story. Generally speaking, that alone was enough for me to earn their respect, and that's all I really cared about. They knew I wasn't there to exploit the circumstances and that my interest in their story was genuine. The single thing that helped me gain acceptance was taking photos back to the people in them. That let them know I wasn't just passing through, and they could then visualize what I had only been talking about previously.

AC: What's the biggest lesson you learned about that community while making the "Fault Line" series?

JL: I learned there's a deeper sense of community in old East Austin than there is in most other parts of the city. Although East Austin was originally created by forced displacement from other parts of town, over several generations it grew into a rich and vibrant community with wonderful customs, celebrations, and history. I also learned it's going to leave a hole in the social fabric of Austin that will never be fully replaced when it's gone. I lament that fact.

AC: When you take people into East Austin, what's the first place you take them and why?

JL: I generally take them to Sam's BBQ, because its owners and patrons were the first in the hardest part of East Austin to take me in. It's also emblematic of the whole story of East Austin, a historic place struggling to hang on in the face of the change engulfing it.

AC: What does it mean to you to show these images in that community? What kind of response have you gotten to them?

JL: The whole project is intended as a tribute to the people and places in the photographs. It's their story, I just took the pictures. I've had the full range of reactions: anger at me for leaving something important out, anger at the change taking place (lots of that), to what I get the most of, a sense of gratitude that this important story is being told. I can only hope I've told it with compassion and honesty.

John Langmore will be showing photographs as a guest at Delta Millworks, 4701 E. Fifth. For more information about his work, visit www.johnlangmorephotos.com. 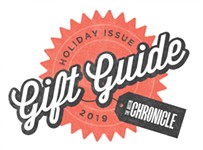 A Political Guide to Gifting in 2019
Give the gift of hope! East Austin Studio Tour 2019: Week 2 Recommendations
Looking for something bigger, brighter, wilder than paint on a canvas at this year’s EAST? Do we have some ideas for you