The novella's nightmare world is so engrossing, you can't tear your eyes away 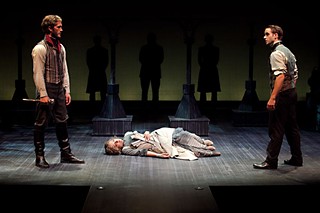 
My heart's racing, and I can't catch my breath. I feel feverish. I just walked out of the UT Department of Theatre & Dance's careening and consuming Dr. Jekyll and Mr. Hyde, Jeffrey Hatcher's haunting adaptation of the 1886 Robert Louis Stevenson novella.

If the play felt like a runaway train screeching straight out of hell, it was because the masterly production team choreographed it as such. With direction by Daria Davis so precise that it rendered the complex production seamless, and voice and text coaching from Barney Hammond, Quetta Carpenter, and Jeremy Cudd so ingrained in the actors that it's almost unnoticeable, the solid cast of six shifted effortlessly between uppity crime-solving Londoners and the heinous perversions of Henry Jekyll's mind-splitting experiment. The intensely focused and constantly visible actors were almost like marionettes through which the story told itself.

Like a gory car accident or a documentary about child kidnapping, Dr. Jekyll and Mr. Hyde held me dangerously rapt, repulsed yet unable to tear my eyes away from the nightmarish world onstage made more vivid by Rowan Doyle's looming faux wrought iron set, Kate Leahy's arresting lighting, and Yao Chen's impeccable, slightly whimsical costumes. Miles Polaski's perfectly timed sound design successfully manipulated my emotions, though it reminded me too much of the soundtrack to a B-horror film. That said, Dr. Jekyll and Mr. Hyde was easily one of the most effective and meticulous productions I've seen in Austin.

Though this attention to detail was engrossing, Hatcher's fast-paced script, which keeps the audience guessing and gasping along with the characters, was what really knocked the wind out of me. In it, an idealistic Jekyll (Kyle Christopher Schnack) unleashes his bestial Hyde side (played in tandem by Geoffrey Barnes, Will Brittain, Amanda Morish, and Chrissy Shackelford) in an attempt to create a utopia where everyone can isolate and expel suppressed immoral instincts in lieu of "peace of mind." But Jekyll is not impervious to the seduction of debauchery as he attempts to put an end to the horrors he has committed as Hyde. While the formerly good doctor descends into depravity, his counterpart learns to love – or at least pity – brave chambermaid Elizabeth (Liz Kimball), and we are left wondering whether the wool's been pulled over our eyes. Is anyone the good guy here? As the lights dimmed on this elegant and brutal production, I realized with a shudder that Jekyll's attempt to separate good and evil was a tragically failed experiment, an indulgent fantasy. Dr. Jekyll and Mr. Hyde forces us to acknowledge the Hyde (or is it the Jekyll?) lurking within. As a maid who witnessed Hyde committing a brutal murder confesses, "The bad in me wanted to watch."