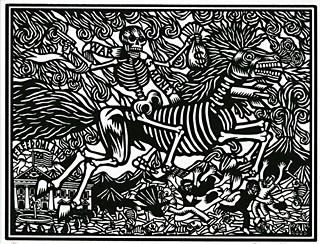 
First there's the drawing talent. There's got to be that in order to effectively render the ideas in the artist's head. Artemio Rodriguez has that in spades, which is how we phrase it, taking cues from the card game of bridge, after the cards' darkest suit that's black, black, black.

Printing is much about blackness, too, about the techniques and effort required to reproduce different grades and shades of shadow tone: You want it clean and stark, usually, as vivid as ink and pressure allow, and Rodriguez gets it that way. He gets it that way in prints on what you'd consider regular-sized paper and on paper that's bigger than the silhouette of a fat man's coffin. What he's often rendering are prints in the living-skeleton realms formerly explored by the legendary José Guadalupe Posada. And, like Posada before him, although the modern age affords the current artist more of a choice, Rodriguez doesn't mess around with latex or linoleum or anything so easy. Rodriguez cuts his macabre and darkling tableaux directly into wood. Even the pieces as big as a door: wood.

Imagine your own hands after attempting such a thing, the nicks and scrapes and lacerations growing between knuckle and wrist, your blood flowing as bright as the deepest blacks in Rodriguez's stunning exhibition at Slugfest. That's where these images of skeletons and demons and women and abcedaria and more are on display right now. That's where we recommend you stop for a glimpse of mythologies manifested, of consummate skill in service of narrative so powerful it could fell a tree.