All Over Creation: Award Fever

Whenever you feel like throwing a pillow over the Payne Awards, consider this 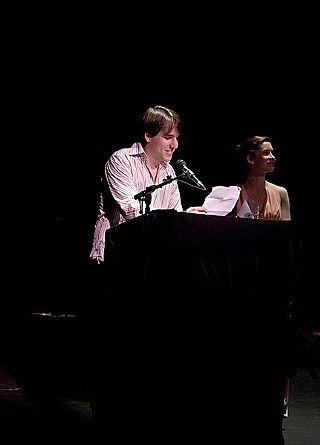 I nearly hauled off and threw a pillow at the TV while watching last week's finale of Project Runway. When Michael and Nina, in another act of seemingly willful inconsistency, started denigrating the consistently classy designs of Viktor and praising the DayGlo campwear of bitchy-bossy human eyebrow Josh, it just set my righteously indignant pillow-throwing arm atwitch. Which reminds me: The B. Iden Payne Awards were handed out last week. And I'm reasonably sure that if the local show folk who attend were allowed to carry pillows into the ceremony, they'd have covered the State Theatre stage by evening's end.

Now, that's not a slap at any of this year's recipients. It's merely a commentary on the way theatre people here react to the Paynes, and they've been like that since the awards were started back during the Ford administration. At first, when winners were determined by a vote of whomever came to the ceremony, people got steamed over the shows with big casts taking home all the prizes. Though that system was quickly scrapped in favor of mail-in ballots sent only to dues-paying members of the Austin Circle of Theaters, which sponsored the awards, it did little to lessen the grousing over who made it onto the ballot and who was left off, who ultimately won and who didn't. I served two stints on the awards nominations committee (in the early Eighties and late Nineties), and both times, major reform efforts were undertaken to try to bolster the credibility of the process, and the dressing rooms of stages across the city still buzzed with charges that committee members had biases toward this company and against that one, that their grudges against certain artists kept them from being nominated, how people voted for shows they didn't see, how the voting wasn't about quality but about popularity, yadda yadda yadda. To be fair, this isn't peculiar to the Payne Awards. You'll find such fume and froth anywhere awards are handed out – the Oscars, the Grammys, the Daytime Emmys – and in any judged competition where "one day you're in; the next day you're out." The Austin Critics Table certainly inspires its share of kvetching, and I have no doubt I'd be buried under a fusillade of pillows if folks chose to express their true feelings about our awards in that way when we issue them. But by virtue of their longevity, the Paynes have the greater claim on a local tradition of disputatiousness.

So why even have these arts awards if they're so divisive and infuriating? It's not as if every profession recognizes its work this way. Plumbers aren't honored for the year's best installation of a kitchen-sink disposal, nor are waiters for outstanding recitation of the daily specials. If they don't require awards, why do artists? Well, awards have become valuable to us in building community, bad attitudes notwithstanding. In our fractured, cocooning culture, the handing out of these awards is one of those increasingly rare public rituals that can still draw us out of our separate corners of the community – like homecoming dances and Independence Day parades – and into a shared space, to gather us together in acknowledgment of our common bonds. Even with all the carping, the Payne Awards reaffirm the shared commitment of people making theatre in Austin. It's reiterated in acceptance speech after acceptance speech, year after year. Winners express their appreciation to their colleagues, to audiences, for the support they receive for their work here, and hearing that said aloud in a room full of people who devote so much of their lives to an art form that's largely marginalized in our contemporary society validates the work of everyone who makes theatre here, not just the award recipients. That was never so clear as this year when Gary Jaffe, who made eight trips to the podium to accept awards for the Tutto Theatre Company production of The Dudleys!: A Family Game that he directed, spun his story of being fresh out of Yale and unsure of what to do and then was given opportunities to work and so much support for that work in this community.

So the choice of honorees for these awards at times drives you crazy. You can bond with others over that, too, the way you share a conspiratorial roll of the eyes with your Aunt Corinne as you suffer through the same family blather every Thanksgiving – community through shared misery. We could probably stand to dial back the outrage a little – if you're worried about injustice, try volunteering at a homeless shelter instead of railing about award omissions – but it's fine to gripe. Just recognize that as the ritual of awards goes, we all win. And how about somebody getting to work on awards for those plumbers?

For a full list of the 2011 B. Iden Payne award winners, visit www.bidenpayneawards.com.

All Over Creation: Acknowledged Gains
When we honor the living, we all get something out of it