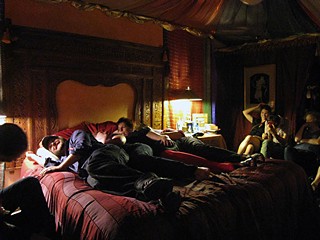 
According to Annie La Ganga, the citizens of Vashon Island, Wash., don't do, make, or create anything. They simply expect that what they need is going to come, and thus, they manifest. They might, for example, head to the beach with a half-assed chunk of goat cheese, saying, "Let's manifest a picnic." By the time they get to their destination, says Annie, there will probably be someone waiting with a platter of sandwiches.

Just like her colorful friends on Vashon, Annie La Ganga doesn't create theatre. She doesn't do it or make it. Annie La Ganga manifests theatre. And her directors/producers/friends Josh Meyer and Matt Hislope of Rubber Repertory have likewise manifested 12 top-secret surprise venues for their latest production, Surprise Annie, which is exactly what it sounds like: two glorious, uncut hours of Annie.

Opening night was on a boat. The third show was in a dark, mysterious place called the Vault. And the performance between was in a boudoir. More precisely, it was in local costume designer Pam Fletcher Friday's sumptuous, crimson-draped Turkish tent of a boudoir at her eclectic kimono-and-African-mask-filled West Lake Hills home. Just before Annie arrived, we 16 audience members donned the shiny red masks that Meyer had given us and sat in plastic chairs around the luxurious bed, waiting silently. Hislope carefully led blindfolded, pigtailed La Ganga into the intimate bedchamber and laid her on the bed, which Friday had thoughtfully turned down; I was so nervous and excited I nearly peed my pants. "Aaaaahhhh," La Ganga sighed in contentment as she pulled the duvet over her black dress and neon red tights. Meyer gave us the cue, and when we all yelled "surprise," La Ganga freaked out. When she managed to get her blindfold off, she looked around in shock. "Oh my God ... oh my God!" I laughed hysterically at her incredulity.

It's safe to say that the audience and producers alike had a ball listening to La Ganga manifest stories about her Vashon friends, a cast of characters that included Jude, a "lesbian civil servant" who liberated budding gays from "Closet, Iowa"; Maggie, one of Jude's rescue cases and an expert in Indonesian music; and Annie's hammer-wielding, ultra-masculine alter ego, "Manny." La Ganga is a frank, hilarious, and endlessly fascinating raconteur; in her own words, she's "a charming motherfucker." I could have listened to her manifest stories all night long. No matter which ones she manifests during other performances, I guarantee she'll charm the pants off of you.

And in fact, she almost did charm mine off. I mean, how else could a boudoir performance end but with a good ol' fashioned spooning session? Yep, Annie La Ganga spooned me. And she's a damned good big spoon.