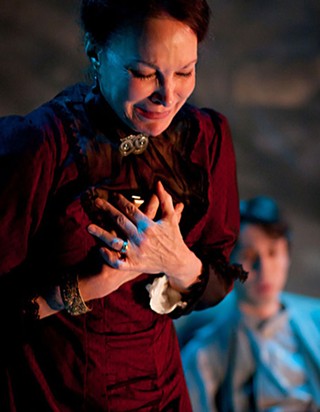 
Sometimes, attending the theatre can bring a sense of genuine satisfaction. When performance, set, and costumes come together to create a unified vision of something worth watching, the audience can enjoy something apart from their daily lives for an evening. The current production of Ghosts provides exactly that.

Penfold Theatre Co. and Breaking String Theater – two strong companies in their own rights – have partnered to produce this Henrik Ibsen drama. The result is one of the best casting jobs I've seen this year in terms of matching actors to their roles. Director Graham Schmidt of Breaking String has directed several other plays from this period, and he knows not only whom to cast but how to direct them – how to navigate the parts that are more foreign to today's audience and how to rely on what is unique about this sort of theatre.

Babs George holds the lead as the unfortunate Mrs. Alving. She has plans to dedicate an orphanage in memory of her late husband. At first all seems as it should: a respectable widow and her adult son (Penfold Artistic Director Ryan Crowder) giving due homage to the memory of their patriarch.

What conversations between Mrs. Alving and her spiritual confidante Pastor Manders (Michael Stuart) reveal is that her husband did not live up to his image as a bulwark of family life. Instead he was a perpetual wanderer and wastrel, and Mrs. Alving spent an entire lifetime trying to support him and convince him to give up his womanizing, to no avail. The orphanage is her attempt to burn up what little is left of him: his money. Sadly, her husband has one further legacy that emerges: a case of syphilis, passed down to their son. Ibsen's use of syphilis as a plot point is a bit amusing if taken literally, but put into context, even mentioning the disease was a shock to his audiences, and the ramifications for the characters are profound.

Ia Ensterä has created an intriguing set, with enough string stretched across corners to make any cobweb big enough to trap the unwary human who wanders past. It's a look that evokes actual and not just symbolic ghosts, aided by a lighting design from Steven Shirey that drives home the idea of nighttime. In fact, after a while, one starts to notice the nighttime feel, thanks to an overreliance on blue lighting.

Penfold and Breaking String each excel at taking a play and making a well-rounded production from it, with solid performances, direction, and design. It is good to see that in teaming up, they have both brought their strengths to the mix.