All Over Creation: Classical Alchemy

How Austin is transmuting the music of old into dance, art, and comedy 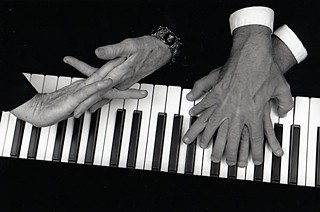 I used to think that classical music had a locked atomic structure – you know, like lead. Once one of those bewigged-slash-lion-maned composers of the 18th or 19th century arranged all the notes and rests in a specific combination, the resulting work couldn't be tinkered with. It went into a little box on the Periodic Table of Symphonies or Sonatas or String Quartets and remained there, fixed and immutable.

That, of course, was before I began encountering Austin artists with abilities that ancient alchemists would give their right philosopher's stone for. These are creatives who can take the oh-so-set elements of this music and transmute them into other forms: dance, comedy, visual art. So you think classical can't dance? Stephen Mills will convince you otherwise. The Ballet Austin artistic director won't have a work by Bach just accompany a ballet he's created. As he proved in The Bach Project last year, Mills will pull the DNA right out of Johann Sebastian's music and encode it in movement. Or have compositional magus Graham Reynolds capture the soul of the piece and recast it in a new musical body of his own devising to which Mills will fuse his choreography. Chronicle dance writer Jonelle Seitz reports that Mills is at this classical transformation trick again this week, now with the genius who gave us The Magic Flute. (See "'The Mozart Project.'")

You figure classical can't be anything but "serious" music? Lyova Rosanoff and Steve Saugey play it for laughs. Literally. The two classically trained musicians take masterworks of the canon and undercut their majestic grandeur by insinuating into them sitcom tunes and commercial jingles. When Cher's "The Way of Love" pops up in the middle of "Variations on a Theme by Paganini," it's like having dignified old Brahms plop down on a whoopee cushion. Saugey and Rosanoff have been practicing such classical mischief for more than three decades, most of it as musical parodists in residence at Esther's Follies but also in independent projects such as the Austin Flops Orchestra, Beethoven's Birthday, and Forbidden Classics. And they were two of the wits who transported Strauss' Die Fledermaus to Austin, rewriting it as The Bat for Austin Lyric Opera. Their musical shenanigans are of the highest comic order – they're Austin's royals of ridicule. This weekend, the pair are mounting their first project in nine years, an Austin Flops Orchestra musicale featuring their lampoons of Liszt ("Catalog of Continental Composers"), Bach ("Brackenridge Concerto"), Handel ("The Jalapeño Chorus"), Brubeck ("Blue Turkey Rondo"), and more. If you'd like to hear classical transmuted into fool's gold, this is the time.

Or perhaps you'd rather see classical music. If so, then Matthew Hinsley is happy to oblige. The executive director of the Austin Classical Guitar Society proved himself adept at recasting the form with the weeklong Austin Goes Classical series of events surrounding the Guitar Foundation of America convention here in 2010. Now he's setting his sights, as it were, on the visual arts with Austin Pictures. The multimedia concert takes the alchemical trick that Modest Mussorgsky used for his celebrated piano suite Pictures at an Exhibition – transforming visual art into music – and flips it. Hinsley invited 11 students from area high schools to create a painting from one of the movements in Mussorgsky's suite. What had been sound inspired by images is transformed back into images, like a text translated from Russian into English, then back into Russian. The paintings – all of which may be seen at www.austinpictures.org – take you on an amazing journey through mediums and time and culture, from 19th century St. Petersburg to 21st century Austin. But Hinsley doesn't stop there. He's also commissioned composer Joseph Williams II to emulate Mussorgsky and transmute five scenes of our fair city – The Hill Country, Floating on Lady Bird Lake, The Dance of the Grackles, Violet Crown With Cicadas, and Capital City Construction – into music and have the results played by an orchestra of 100 young guitarists from Austin and other locales such as Albuquerque, N.M.; Brownsville, Texas; and Oklahoma City; with the world-class Miró Quartet, under the direction of Austin Symphony Orchestra conductor Peter Bay. And to cap it off, in tribute to the original inspiration, the event will close with a version of Pictures at an Exhibition reworked for solo guitar and performed by the incomparable Jorge Caballero. If this evening doesn't make you a believer in classical music's mutability, well ....

Of course, it isn't simply the music that's being transformed. It's those of us who hear it, too. Our sense of the possible – which sometimes stays as locked as lead – opens with golden promise to embrace the unimagined, the unexpected, the new. 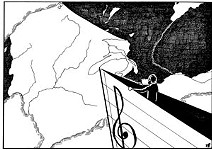