Art can seem mysterious at times, with all its various schools of expression and arcane methods of rendering and self-referentiality. Even just visual art, and even just one flavor of visual art, can be a tough nut to crack – especially when you're dealing with labels alone. What, for example, is Fauvism?

Fauvism, Wikipedia tells us, "is the style of les Fauves (French for 'the wild beasts'), a short-lived and loose group of early 20th century Modern artists whose works emphasized painterly qualities and strong color over the representational or realistic values retained by Impressionism." (Think Henri Matisse.) 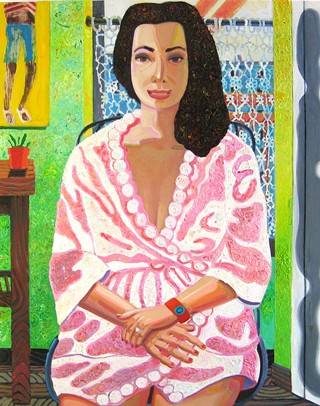 Who's That Swirl Part II, by Daniel Heidkamp

Since we would had to have previously learned that in art class or via equivalent autodidact activities, we might say, "Gee, thanks, Jimmy Wales." (Because Wales is the man who started Wikipedia, see.)

And Fauvism – or let's call it neo-Fauvism, because, hell, the original movement began more than a century ago – can be experienced right in the pigment in Austin, currently, in a show called "Wild Beasts." For which we might say: "Gee, thanks, Sonia Dutton." (Because Dutton is the woman who runs the Champion Gallery in Downtown's asphalt-latticed heart, see.)

"Wild Beasts" includes works by Ryan Schneider, Daniel Heidkamp, Shara Hughes, Joshua Abelow, and Ezra Johnson, all of whom are definitely emphasizing "painterly qualities and strong color," and all of whom are doing it, we daresay, right. There's no sense in this exhibition of any of the painters struggling to create something or being constrained by their lack of skill or commitment and so defaulting to simplicity. You know what we're talking about, reader, because you've seen artworks where the creators have done the very best they can, and still the most viewers can get is that meh feeling of "Well, at least they're expressing themselves, bless their hearts."

You don't have to worry about blessing any of the hearts of these wild beasts. You can take in the simplest paintings here (Abelow's almost typographic treatments of color and shape) or the most complex ones (Hughes' psychedelic residential interiors, Schneider's domestic tableaux) or any of them, and what you'll likely feel is that it's your own eyes that have been blessed with these visions. You'll be all, "Whoa, yes, this is what art galleries were meant to exhibit: the work of professionals!" But especially: professionals who are unafraid to play.

Scrutinize Heidkamp's gorgeous series of portraits of art collectors from Austin and NYC. Who needs hyperrealism – that's what photographs are for, right? – when paint qua paint can so vividly show you what people really look like? The artists here are showing you the world as you might experience it while tripping (happily) on LSD, as you might see it if your visual cortex were massaged with a kaleidoscope soaked in the Pantone Matching System. (And isn't that extraordinary vision one of the basic things that artists are supposed to provide – according to the Seekrit Artists' Agenda?)

"Wild Beasts" is up until Oct. 8, affording you plenty of time to launch your own investigation. And you do like colors, right? There are more colors here than in the titles of a dozen Travis McGee novels, but it's no mystery as to why that, in this case, matters. These artists – three from Brooklyn, one from Atlanta, and one from London – have been busy shaping wonders that will enrich your aesthetic life far more than, say, some poker player's busted flush.