The Civil War, in tight close-up and sung

How do you convey the drama of the Civil War in all its epic sweep? If you're Ken Burns, you go macroscopic and spend 10 hours of film covering the conflict from every corner of the Union and Confederacy, with all its major figures and battles depicted. If you're Ricky Ian Gordon and Mark Campbell, though, you go microscopic, focusing on one small county perched on the line between North and South, with its anonymous residents relating the war's impact in 90 minutes of song.

In Rappahannock County, composer Gordon and lyricist Campbell have five singers take on 30 roles – from soldier and slave to abolitionist preacher and embalmer – to track the war's progress year by bloody year from their corner of Virginia. Given the acclaim that greeted Gordon's other recent foray into America's past, an opera based on John Steinbeck's The Grapes of Wrath, this work promises to be both musically rich and moving.

Sept. 21-22, Austin becomes the third city to see Rappahannock County. Local presenter Texas Performing Arts co-commissioned the work, with the Virginia Arts Festival, Virginia Opera, and the University of Richmond's Modlin Center for the Arts (which TPA Director Kathy Panoff ran prior to coming to Texas) and with funding from its new, big Mellon Foundation grant (see "Texas Performing Arts," July 1), TPA is bringing Gordon and Campbell to town with the show. They'll discuss it with University of Texas history professor Jacqueline Jones following Thursday's performance. 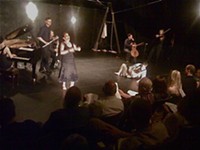