All Over Creation: Element of Surprise

The joys and importance of 'I didn't see that coming' 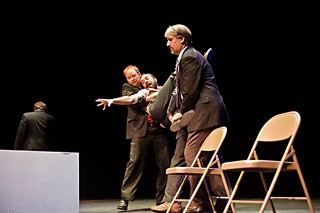 That announcement may just rank as the Moment of the Summer where my cultural consumption's concerned. Not because I bear any ill will toward the Amazon princess – on the contrary, long may her star-spangled bloomers wave, I say – but because when Chris Allen delivered that news to his castmates during a Confidence Men show set in the Hall of Justice, it hit them and us like a haymaker from the Hulk. Up to then, the Super Friends – or rather, their David Mamet-ized counterparts from some multiverse Earth-Testosterone – had been full of locker-room swagger about who had hooked up with WW and who hadn't. Even unseen, the Amazon was a dominant presence in the scene, which meant her unexpected demise caused a radical shift in everything – character dynamics, character objectives, tone – and really raised the stakes for every figure onstage in the way that a turning point in any great play does. This one, though, was all the more impressive for having been created on the fly. Like all Confidence Men shows, this one was completely improvised. No one saw Wonder Woman's death coming – not the audience, not the other Confidence Men, maybe not even Allen himself.

And that is part of what was so glorious about it: the way the moment took everyone by surprise. Confronted by an action that you haven't anticipated, you get a kind of charge. It may be the jolt of adrenaline that comes with a scare, the rush of pleasure from an unexpected treat, or the feeling that somebody's slammed the brakes on your mental processes, but the response is palpable, a shock to the system that is, in many cases, quite enjoyable. When a work of art can generate that level of surprise, you can't not be engaged. It grabs you by the collar and yanks you to it. Attention, as the widow of Willy Loman noted, must be paid.

That isn't to shortchange the power of art that draws on the familiar – say, work rooted in myth and folklore; precisely because it plays off what we know will happen, such work can burrow deeply into us and strike chords at the core of our being. Still, we relate to a work differently when we know where it's going. We begin to build a box around it; it becomes a thing contained, and we find a kind of safety in that, just as we do with a tiger in a zoo. But when something in a work of art catches us off-guard, that box is shattered and all our sureties about what will occur go with it. With no cage around the tiger, there's no telling what might happen. (And thank you for making that lesson explicit, The Method Gun.) We can't take anything for granted, can't be complacent. We have to look more closely. Thus, we become more open to the art, even as the art becomes more open. New possibilities spring into being, and therein lies the essence of the artistic impulse – each surprise the act of creation writ small.

With the Confidence Men, "Wonder Woman is dead" was the gift that kept on giving, one surprise engendering more surprises: Michael Ferstenfeld's Flash admitting his pent-up passion for WW by leaping into her coffin, Allen's Green Lantern revealing to his superbrahs that the Amazon wasn't killed by some baddie but by a fall down the stairs, Jeff Britt's Superman confessing his culpability in this Princess Diana's demise. The thing is, they weren't just bits to get laughs, though get laughs they did – loud and long ones. These surprises took their cues directly from previous ones, building on them and yet managing to spin them – and us – into new and unexpected places. We were treated to one exhilarating "whoa!" after another, each revelation so smartly timed and artfully integrated into the story that it not only had us wondering what would happen next but also made us rethink what had happened before.

I'd experienced that the night before I saw the Confidence Men, too. At the conclusion of the splendid concert introducing William Fedkenheuer as the newest member of the Miró Quartet, this violinist who had just proven himself extremely adept at performing works by Schubert, Brahms, and Glass informed the crowd that at one time he'd been a country-western fiddler. I must say, I had not seen that coming. And upon hearing him lead the ensemble through a pretty rousing run of "Orange Blossom Special," I figured I needed to scrap any preconceptions I might have had about Mr. Fedkenheuer and even reconsider what I'd observed him do earlier. The feeling and technique that I'd noted in his playing of classical music might spring from somewhere other than the conservatory, and he might be capable of more than I know. I hadn't imagined such a thing when I walked into Bates Recital Hall. What a grand discovery to make, how magnificent a surprise.