Using play to map the emotional terrain of 9/11

The cast of september play

"september play has been living in me a long time," says Courtney Sale. And by that, the master's of fine art candidate means longer than the two years that she's been in the University of Texas Department of Theatre & Dance's graduate program for directing – though Sale knew when she landed in Austin that she wanted to "tackle the event" of 9/11 in some theatrical way. But her desire to explore its meaning publicly is rooted in the exploration she's been doing privately since the day itself. "My husband lost his brother at the World Trade Center on September 11th," Sale says. "Personally, I am dialoguing about September 11th on a daily basis." And the conversations she's had with her husband on the topic, she continues, "are discussions I want to share, a space I want to create for other people, specifically those outside the epicenters of the attacks. I think it may be the best way for me to pay tribute."

With her own path through the emotional and psychological minefield of 9/11 coming from dialogue, Sale initially thought her stage piece might follow a similar route – a documentary work drawn from her exchanges with others in the vein of The Laramie Project. So, after receiving a Graduate School Continuing Fellowship to develop the piece, Sale set about gathering material: "Me, in a room, conducting interviews about people's experience of September 11th and where we might be 10 years later." She continued to work on her own for months, her only real support being some grad students from the LBJ School of Public Affairs who helped her review the collected material. 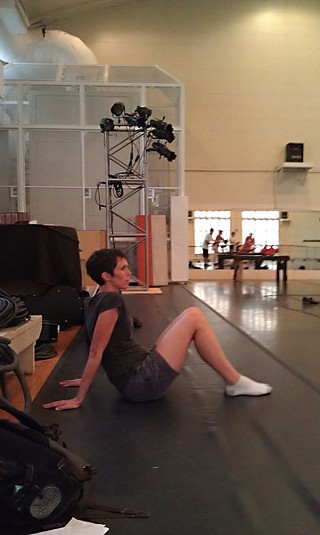 But more than a year into the process, something changed. As part of the 2011 Cohen New Works Festival, Sale helped create The Fictional Life of Historical Oddities, an original piece based on the lives of the Dionne quintuplets. The site-specific outdoor work, which included scenes played in shadow and projections on buildings, as well as choreography, puppetry, and sound, was developed through a broader and deeper collaborative process than most traditional theatre productions. As a result, says Sale, "My practice transformed." In sound designer/playwright Tom Horan, scenic and lighting designer Darwin Gilmore, scenic designer/puppeteer Rowan Doyle, and lighting designer Cheng-Wei Teng, she had discovered "a team of artists who work at the furthest reaches of our capabilities." The strength of the creative partnership and the enthusiastic response to The Fictional Life – playwright Octavio Solis called it "a flawlessly executed performance piece that obliterated all the boundaries between art forms" and the Rude Mechanicals' Kirk Lynn said, "This group of collaborators has a powerful future stored up in a battery of tools they deftly manipulate collaboratively" – left the team eager to work together again. So, says Sale, "We got in a room and looked at each other and said, 'What's next?' september play was well into development with lots of material, and I proposed it to the group. And there were two reactions: 1) 'This sounds terrifying.' And 2) 'Yes, we should do this.'"

And do it they have. This Sunday will see the first and only performance of september play, and it will be much more theatrically adventurous in nature than Sale first imagined. Indeed, it's described on the website as "playful." "'Playful' is used in the sense that play is perhaps the best kind of therapy," Sale clarifies. "Theatre gives us an opportunity to rewrite endings, to reclaim voices, and to scaffold our fears and grief. We accomplish these goals using objects as metaphors, and a variety of mediums – video, dance, puppetry, etc. – to allow audience to both enter and exit the play. We fill the play with pockets of tender reflection without diminishing the loss. In many ways, there are childlike sensibilities in our inquiry. Can we sit longer with the innocent questions? What answers will arise if we do?

"We really wanted to address the fact that for most people, September 11th was experienced through media rather than as a witness to the actual event. We had a rich discussion about the lasting imagery from the attacks, and suffice it to say that in our collaboration we really didn't see the need to repeat the image of the planes flying into the building. Personally, I will be fine if I never have to see that again in my life. But the media component excited our interest and seemed important to a collective narrative. We decided to take an extremely bold gesture and rewrite the history using animation. So there's a nod toward news media but told with alternate endings that might inspire, make you laugh a little, and in a lot of ways embrace a satisfying innocence.

"I believe what we end up tracking is emotional terrain. Threaded through the piece are my emails, which I present to a Sister Katherine Kaiser, someone I read about on the Legacy Project website, [which] contains photos and biographies of those lost on September 11th. The dedications vary in content, though typically a spouse or partner or parent or child provide remembrances. Sister Katherine was the second grade teacher of a gentleman who was lost in the Pentagon. That relationship filled me with a great sense of curiosity. Had they always maintained a relationship? Why didn't other people respond to his death? That relationship seemed so different than the many others I encountered. So I wrote to her. Again and again. And she never wrote back. And that unanswered relationship became critical to many questions I have about September 11th. It situated me in a place of genuine reflection, a reflection that required me to be patient, and I think very little response to September 11th has been incubated in a patient reply."