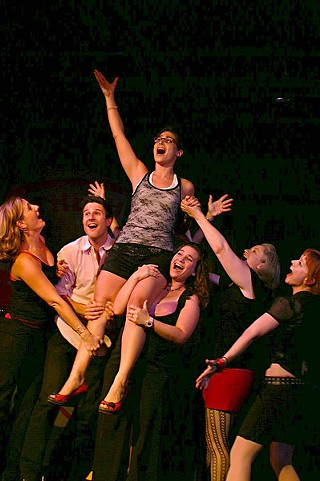 Kacey Samiee's Tammy finishes her big number, "I'm a Star," and is lifted by the rest of the cast of Prep School: The Musical (Photo courtesy of Christa Gary)

To see these six people performing this musical number together about the importance of being prepared at school – singing in harmony, stepping in time – you'd swear they rehearsed the number beforehand, perhaps even took its lyrics from a script. But they didn't. When members of the Austin improv troupe Girls Girls Girls took the stage of the Hideout Theatre on Friday, Aug. 12, they began performing an original musical as they have for more than eight years: without any set characters, dialogue, music, or plot, and no idea where their story would go. They were flying blind.

Which is not to say that they weren't – like their characters in that evening's 55-minute improvised musical – prepared. The kind of improvisers who can make a group musical number or extended narrative play out as smoothly and effortlessly as a scripted, rehearsed performance leap into the void of a show like Prep School: The Musical with a deep background in the form – its principles, strategies, and rules – that helps them keep the story moving forward and its characters developing, even though they have no direction to follow. With the Out of Bounds Comedy Festival giving Austin more than 100 opportunities to witness experienced improvisers at work this week (see "Out of Bounds 2011," below), it seems an especially fitting time to look at an improv performance from the inside, to see how these daredevil artists manage to create, as improv historian Jeffrey Sweet says, "something wonderful right away."

Girls Girls Girls starts with a little help from the crowd: a suggested location where their musical may take place. Shana Merlin, who's been with GGG since its earliest days as Rock Star Girls Galactica 3000, chose "prep school" from the many suggestions shouted her way, and the show began with that group number about being prepared. Starting with a song is standard, says Merlin. It gives the players an opportunity "to establish theme and tone and place and time."

That was followed by three quick scenes that established a cast of characters. In the first, Jason Finkelman, the Girls' guest improviser for the night, becomes George, a young man trying to reassure his parents, played by Merlin and Megan Flynn, about his senior year of prep school. From there, they leap to a hallway in the school where Kacey Samiee tells Cynthia Oelkers, "This year I really want you guys to like me." Oelkers' response: "Fat chance." Instantly, they establish uncool teen girls trying to fit in with the cool crowd. Sarah Marie Curry jumps into the scene as Miranda, the meanest of the school's mean girls, who promptly rejects Oelkers' character, Steph, and proclaims Samiee's Tammy her new BFF. "Pass it around, minions," she announces to the lunchroom. "Tammy is the new Steph." From that grows a new scene with Finkelman as the school janitor, sweeping up in the office of Principal Peterson, played by Amy Averett. When Finkelman's character offers the principal some advice on running the school, Peterson suggests they swap places, so he takes her job, and she takes his.

The three scenes are part of an established structure within the format: They set up a range of characters and situations that can be woven together gradually during the course of the show. "We try and have these scenes be as far apart as we can [at the beginning]," says Merlin, "because if they start too close, the show will lose its shape and we'll get too narrow too fast."

No one improviser is driving a scene or storyline. Each player may enter with an idea of where to push a scene or character, but the trick to making it work is for each player to be willing to give as well as take. Merlin refers to players' contributions to the scenes as "offers," and how those offers are made and accepted – improv's legendary "yes and" principle, which dictates that a player say "yes" to anything another player creates in a scene – has everything to do with the forward momentum and development of character arcs. Samiee made the deliberate choice to play the unpopular girl who gets sucked into the in crowd, but she might not have had as much success with it had fellow player Curry not built on it with the controlling Miranda. "My character arc is pretty standard – it's every Eighties movie," says Samiee. "[Curry] saw it and picked up on it, and she knew where it was supposed to go. Her character was necessary for my character, and she did what she needed to do for the show."

"Kacey makes that opening offer of 'I'm unpopular,' and the whole cast knows 'I'm going to make you more unpopular,'" adds Merlin. "We want to build on that, and heighten and expand and explore that until it breaks. The more dominant Sarah Marie is, the more she's accepting Kacey's offer. It's counterintuitive, but making big offers in improv is generous. Often people think, 'I don't want to ruin this scene, so I'm going to play small and middle offers,' but that actually gives the other player nothing to work with. It's much harder to improvise with that gloppy, gooey improviser that doesn't want to take a stand. When it's cooking, it should be like tennis, where you're hitting the ball back and forth with strength."

Over the next half-hour, Prep School: The Musical alternates between scenes of Tammy's elevation to popular girl, George seeking to score with a girl before the year is out, and the problems engendered by the principal and the custodian swapping jobs. The storylines begin to merge when Tammy and George meet in the cafeteria. At first, he simply counsels her on how to be cool. But then they discover a mutual interest in history, and when she names William Howard Taft as her favorite U.S. president, he shouts that he's his, too! ("A classic improv technique of enthusiastic agreement," says Merlin.) So a budding romance between the two protagonists is set.

But then Merlin decided to up the ante. "Everybody on the outside was doing this work to try and raise the stakes," she recalls. "I saw these guys flirting, so I decided to come in as [Miranda's boyfriend] Tony and just make out with Sarah Marie."

"Which made it super awkward for me and Jason," says Samiee.

Samiee's Tammy gets a hottie makeover from Curry's Miranda, but when she arrives at the prom, Merlin makes the observation that Tammy is wearing a historical costume. As all of the players are in street clothes, this is an offer that comes out of left field – indeed, Samiee says she stepped into the scene thinking she was in the Miranda get-up – but the offer is instantly accepted. Curry's Miranda screams at Samiee: "You changed your dress! What the hell is this?!" And Samiee responds, "I just felt more comfortable in something Elizabethan."

Then Merlin shifts the focus to Finkelman and suggests he's in similarly old-fashioned wear: "You're wearing a cravat! Dude, abort." It all calls back to the couple's shared interest in history that wouldn't have happened had the players not been listening to one another throughout and willing to trust one another's creations.

The couple do a Renaissance-style dance before consummating their romance with a hilariously over-the-top bad kiss: mouths as wide open as carps and no lips touching, just tongues curling around each other like blind worms. Oddly enough, it's as sweet as it is funny, and Curry reads the mood just right, following it in now-typical Miranda fashion: "Sincerity and honesty and being yourself is the new being popular and rude and mean." The cast joins for an ode to discovering "who I am at school," and Prep School: The Musical is history.

The thing is, when you see it – and you still can, archived at www.vimeo.com/27829205, along with other GGG musicals – it has this easy flow as if no thought at all has gone into it. And it even feels that way to the people who created it. But, says Samiee, "When we break it down like this, it's amazing to me how much work and thought and actual education in improv went into all of the choices that were made."

The weeklong blast of late-summer comic relief that is the Out of Bounds Comedy Festival got off to a roaring start on Tuesday, and while some choice comedy groups and stand-up comics have yukked it up the first two nights – seriously, I've already missed Seth Cockfield? and Improv for Evil doing "Time Hobo"? – there are 100 improv and sketch acts and 50 stand-ups still to perform before the 10th anniversary OOB closes out on Labor Day night with the improv trio Uncle's Brother, featuring Saturday Night Live alumnus Tim Meadows. To see what some fest participants say they're looking forward to at OOB X, see "Out of Bounds Comedy Festival," Aug. 26, and "Out of Bounds Comedy Festival Picks," Aug. 30.

For a complete schedule and ticket information, visit www.outofboundscomedy.com.