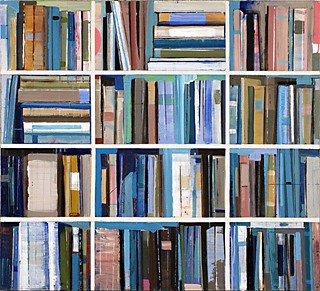 What is that thing about "architecture is frozen music," as either Arthur Goethe or Wolfgang von Schopenhauer said? Difficult to deny the precision of the statement, regardless: You look at some baroquely ornate cathedral, and you likely imagine whatever Bach you may have heard; a pile of once-residential rubble conjures tones from Einstürzende Neubauten, sure. But the Wally Workman Gallery's 100-year-old building itself, although perfectly lovely, isn't sufficient to force the audio metaphor, so we must be talking about what's inside?

Yes, we are. Because, imagine the oeuvre of Philip Glass. Pause for a moment as you recall the hilarious knock-knock joke it generated, then continue savoring the really awesome shit the man has done in different ways with cascading repetition, the accumulation of pattern, and subtle shifts of sound. Now add one of those computer-aided mirror effects used on graphics: Put that remembered Glasswork into a four-sided audio kaleidoscope. Excellent. Now turn that into a visual expressed as a precise field of colored squares.

That's what Sarah Ferguson has done with acrylics on clayboard, one color (plus white, plus black) at a time. If you saw just one of these works, you might be like, "Oh, that's a nice effect and well-rendered." You see them all together, you may shake your head in wonder – at the cumulative beauty, at the amount of planning and work that went into each one. You might also eschew the musical comparison and think, "This is how 2001: A Space Odyssey's HAL would perceive a series of neutron stars based on the Pantone Matching System."

If you do think of that sci-fi trope, please recall that Kubrick's film came from a written source: Arthur C. Clarke's short story "The Sentinel," before the tale was later retconned from the screenplay. Recall, also, the many books that used to be nearly the sole repository of the written word before all these sub-HAL computers mushroomed into our lives, and recall the way those books looked on shelves, stacked chockablock together and – well, you don't have to imagine, even if you're relatively bookless: There are the paintings of Stanford Kay.

Kay, as it says on the Workman site, "caus[es] his dynamic acrylic on canvas pieces to blur the line between abstraction and representation." Exactly. Books are reduced to patterns, the way arrays of paperbacks and otherwise are reduced when viewed from across a room. Sometimes Kay represents these imagined volumes pretty much as they'd be seen, and sometimes he plays with the images in clever, painterly ways; always he brings a variegated library of verticals and horizontals to light in so vivid a manner that it breaks our hearts to think that that most bookish of fellows, Jorge Luis Borges, were he alive and blind as ever, wouldn't be able to enjoy the sight. Although perhaps Clarke or Kubrick or Glass could effectively describe it to him ....

This two-person show is, we're suggesting, another excellent chapter in the continuing narrative of the Wally Workman Gallery.