'The Red Shoes': The High-Flying Sweetness of Sky Candy

The high-flying sweetness of Sky Candy

Despite their frequent combination in experimental theatre over the last two decades, circus arts and puppetry don't really coexist comfortably. Although both lend themselves to expressions of the fantastic and whimsical, the marriage more often than not yields very clumsy offspring. In aerial-based circus arts, it's too easy to rely on athletics. People will clap for anything if it's upside down and above the ground. For puppetry, it's difficult to master the technicalities and still achieve true theatre. Combining the two runs the risk of being both too ambitious and too artsy – like the running joke that is mime. While there's nothing intrinsically wrong with mime, it's become almost universally cringeworthy. In the wrong hands, circus arts and puppetry together risk that same fate.

So when it's done well, it's positively refreshing. Sky Candy's production of The Red Shoes, which sold out its May run and is back for a five-show reprise this weekend, was just such an accomplishment. This adaptation of the classic Hans Christian Andersen tale is told primarily through dance and aerial arts, with some successful interweaving of projected shadow puppets and one big, misplaced marionette. Billed as "cirque noir," Sky Candy's version is relentlessly dark, from the heroine's seduction by the scarlet slippers to her ultimate demise in hell. While the storyline was at times a bit hard to follow, it didn't matter. Director and Sky Candy co-founder Chelsea Laumen made sure that the emotional content of each section was complete. In the end, the narrative was realized gracefully.

Including acrobatic adagio, pole dance, and pretty much the gamut of static aerial apparatuses (including chains), the choreography was exceptional. Dancers Michelle Stuckey in the adagio, Brynn Route on the pole, and Celeste Myhre on aerial hoop were the standouts in terms of presence and musicality. The shadow-puppet projections that connected and sometimes accompanied these aerial and adagio vignettes served a clever double role, both providing a Greek chorus for the action and keeping the audience engaged in the underworld during the periodic rigmarole of rigging. They were at once effective and enchanting.

Sky Candy's first feature production grew out of the collective's mission to develop and foster local interest in the aerial arts. Based on the frantic expansion of classes after the close of the previous production, its mission has been a success. Given the initial reception to The Red Shoes, Austin is ready for circus theatre. Blue Lapis Light has long shown Austin what the aerial arts can do for dance; now, Sky Candy is ready to show what it can do for the powerful combination of circus and theatre. 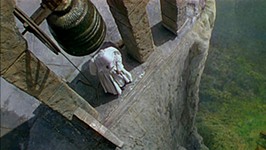 Untether From the Ground for These Seven High-Flying Summer Activities
If trapeze, parkour, and hammock camping all sound too athletic, you can always opt for a rooftop pool Fire
Ignite this summer with fireworks, camp fire, and more.