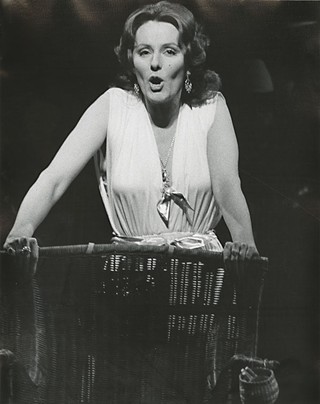 Where else would one want to locate the archival material for The Best Little Whorehouse in Texas than the best little humanities research library in Texas? So naturally, Peter Masterson, who co-wrote the musical's book with Larry L. King and co-directed its premiere production with Tommy Tune, and actor Carlin Glynn, who scored both a Tony Award and an Olivier Award as the show's original Miss Mona, have chosen the University of Texas' Harry Ransom Center to house their collected documents relating to the 1978 musical. Now, just a hop, skip, and a jump from where the governor does "The Sidestep," musical theatre scholars and fans will be able to study how King's 1974 article for Playboy was transmuted into a Broadway hit that ran almost four years, logging 1,584 performances and winning a pair of Tonys and three Drama Desk Awards, and how that spawned both the 1982 film starring Dolly Parton and Burt Reynolds and the considerably less-stellar stage sequel, The Best Little Whorehouse Goes Public, which lasted a measly 16 performances on Broadway.

But the Whorehouse papers aren't all there is to the collection from this theatrical couple. It also includes a wealth of material related to the late Horton Foote, who was Masterson's cousin, most notably documents related to the 1995 off-Broadway production that Masterson directed of The Young Man From Atlanta, for which Foote won a Pulitzer Prize for Drama, and the films that Masterson made from Foote's plays Convicts and The Trip to Bountiful, the latter featuring Glynn opposite Geraldine Page in her Oscar-winning turn as Carrie Watts. For more information, visit www.hrc.utexas.edu.