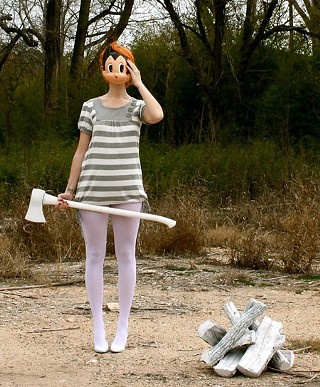 From the series Who Are You? by Hector Hernandez

South Austin's grayDUCK Gallery has a new show coming up this weekend. It's called "Identity Crisis," it's curated by Hector Hernandez, and it's about public and private identities and how they're formed. But maybe, speaking of identities, you're not that deeply enmeshed in the local visual-arts milieu, and so now you're asking, "What the hell is grayDUCK Gallery, anyway?"

grayDUCK Gallery has been around for just over a year – "We opened in May of 2010," says owner Jill Schroeder – and it's a spare and elegant venue just off South First, over there near Polvos and Bouldin Creek Coffeehouse and all that eatery goodness.

A couple of weeks ago, we reviewed the gallery's then-current show (we were very impressed; see "Rock, Paper, Carbon," June 10) and jokingly referred to a conspiracy wherein grayDUCK was created as a replacement for D Berman Gallery to compensate for the latter's recent move to Wimberley. We meant that the two venues share strikingly similar qualities: the understated elegance of the venues themselves, the great care and consideration in the arrangement of works, and the generous amounts of space around what the artists have created for display. There really was, regardless of relentless whispers to the contrary, no conspiracy involved at all.

"When I moved here from Minneapolis," says Schroeder, "I quickly immersed myself in the local arts scene, going to all the exhibition openings I could, volunteering at the museums, getting to know the artists. And I thought there needed to be more representation in the middle of the spectrum, that we could offer something between the more do-it-yourself artist galleries and the higher-end places like Lora Reynolds [Gallery]."

The gallery's name comes from the children's game of Duck, Duck, Goose. Except, says Schroeder, "Where I grew up, we used to play it by going 'duck, duck, duck, duck, grayduck." Uh-huh. And people say Austin is weird?

Well, people say Austin is a lot of things, of course, and those assertions depend on the identity the city offers as well as the identity each person perceives. And that's even more true of people themselves. That's what the artists invited by Hector Hernandez – William Hundley, Carlos Donjuan, and himself – set out to investigate in "Identity Crisis."

"This is the first time I've used a guest curator," says Schroeder. "Hector and I have been talking and thinking about this show for the last two months, and he's been so engaged with it, with exploring the concept of identity and alter ego, how people present themselves differently in different situations. It's also a sort of homage to the superheroes and their secret identities from Hector's childhood. He's doing a collaboration with William [Hundley] on the hero identity."

"Identity Crisis" features mixed media, photography, painting, and sculpture. It's just the sort of thing to make you leave your fortress of solitude, maybe don a mask or cape, and sally forth to the ongoing bastion of beauty that is grayDUCK Gallery.