This group show matches the majesty of the MACC's architecture 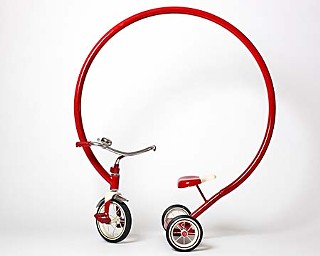 You'd think it would be a bit more of a problem for the visual-arts gallery at the Mexican American Cultural Center to arrange exhibitions that won't be overshadowed by the gorgeous architecture of the building itself. Because, look at that edifice of culture with its enormous white verticals and diagonals, the vistas and alcoves and elegant details: What could match such a building? But the various times we've stopped in over the years, the gallery's offerings have been the equals of such majesty, and this latest show – "Heir Today, Gone Tomorrow," a multi-artist exploration of the complexities of inheritance, legacy, and human interaction – is no exception.

Salvador Castillo, Michael Anthony García, and Hector Hernandez make up the Austin-based collective called Los Outsiders that curated this exhibition. They've brought the works of 14 artists, including García and Hernandez, into the gallery's soaring space, and that space is much improved by their presence.

Just a few highlights: Gabriel Dawe's Plexus No. 7 is a floor-to-ceiling stretch of threads forming an ethereal, filamented rainbow, an eye-drawing shimmer of color at the far end of the vast room; but even its polychrome glory can't overwhelm the more sedate Self Portrait and Selective Memory No. 3 that Dawe has created from thread and fabric.

Carlos Rosales-Silva goes all textual and graphic-design nefarious on an immense scale with his latex mural called Tru Story that name-checks Michael Jackson from, as it were, two different directions.

Sergio Garcia's It's Not Always Easy To Tell What's Real and What's Fabricated (pictured above) presents a child's red tricycle warped into a sort of vehicular Ouroboros, the sort of piece you could unpack volumes of meaning from once your eyes are through being amazed at the high weirdness and craftsmanship of it.

And there are large photographs by Santiago Forero; sculptures by the more usually photographing William Hundley; unsettling, anatomically enhanced video and audio installations by Eduardo Xavier García; a ceiling-abutting video display by Amelia Winger-Bearskin; and more. And all of it adds up to that feeling, amplified by the cathedraline venue itself, of "I'm walking around an exhibition of world-class art like I'd see in some fancy magazine, except this stuff isn't boring like some of the things in those fancy magazines, and it's right here in town." Well, yes, it is: lucky, lucky us.