Start with the smile. That's what everyone thinks of first, after all. As in: "You're so like the lady with the mystic ...."

Not Lisa by Julie Speed

If you seek to evoke that most recognized and lionized of portrait subjects, begin by trying to work your lips into that gently bemused – or is it slyly seductive? – curl, to maneuver your mouth muscles into that persistent enigma of an expression.

And how does it feel to assume so iconic a countenance? What does it mean to inhabit that persona that has been so relentlessly reproduced, commodified, mimicked, and mocked, to become Mona Lisa? Is it just another step in the procession of bastardized versions, one more pale copy of Leonardo da Vinci's original image, a Xerox of a Xerox of the 10 millionth Xerox? Or is there, after the glut of replicas, riffs, and rip-offs, still a place where this art-historical icon can make a direct connection with contemporary culture? 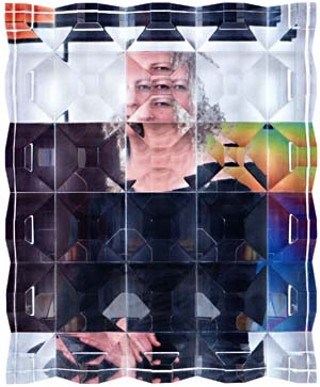 Through the Looking Glass by Margo Sawyer

That's what photographer Rino Pizzi wanted to know, so this countryman of Leonardo's (and resident of Austin for the past quarter century) set out to make a series of modern portraits à la the Mona Lisa, using a latter-day brush – his camera – to capture the images of 21st century women posing as Mrs. Gioconda, the silk merchant's wife, did in Florence around 1503. Pizzi wanted his subjects to spend two weeks studying and practicing that celebrated smile, and to attempt something of the original sitter's posture, but otherwise they were free to choose how closely to follow the source in look, what they wore, and where their photograph would be taken – in a studio, an empty theatre, a junkyard, a field of bluebonnets, wherever they liked. Pizzi hoped that the repetition and variation would work together in such a way that the classic image "becomes saturated but is not mockery. It was not going to be an attempt to monumentalize or return to the 'real' painting. That's a silly proposition. At this point, there's no such thing. There's such a thick layering of imagery, of discourses and fixatives, that even if it was possible to see [the Mona Lisa] with a fresh eye, it wouldn't make any sense anyway. So I wanted to go beyond the iconic, the monumental, the understanding of the Renaissance and the mockery of the avant-garde, and just make portraits of women as Mona Lisa."

But before he shot his first portrait, Pizzi realized that wasn't taking the project far enough creatively. "I thought, 'I'm just doing the same thing that I feel kind of tired of,' which is the 19th century glorification of the eternal feminine," he says. Yeah, like the world needs one more guy saying, "This is what female beauty's all about." So Pizzi began to wonder: What if, rather than just interpreting the Mona Lisa through the photographic portraits, the project wholly reappropriated the image by having the portraits transformed into their own works of art? Pizzi decided to invite women artists that he knew to sit for him. The setup for their portraits would be just as he initially conceived it, but after the photographs were made, they would be turned over to the artists to be reworked however they wished – even to the point of totally destroying the images.

Sixteen artists said "yes" to Pizzi's proposal, despite a reluctance on the part of some to be the focus of a portrait or to impersonate the famed lady of Leonardo's painting. Ultimately, all sat before the camera, torsos and heads at a slight angle but eyes gazing straight at the viewer, the edges of their mouths upturned ever so subtly, imparting to onlookers a whiff of mystery. And with the assistance of master printer Jim Sipowicz – whose deep involvement in the project and ingenuity in realizing the various artists' concepts for their portraits led to his being nicknamed "the 17th Mona" – all layered the expressions of their own creativity onto their own images.

The results, on view at the Austin Museum of Art – Downtown through Sept. 11, transcend mere commentary on the famous smiling lady we all know and function as independent declarations of artistic identity, a chorus of contemporary artists asserting who they are and what they do within a common frame, one belonging to a historical masterwork in their chosen discipline. Pizzi took care to invite artists of diverse backgrounds and media – painters, sculptors, installation artists, a photographer, an architect – so the finished works display a considerable range of styles and materials. The photographs have been printed on materials as varied as cork and copper plate, Mylar and recycled steel. And the images have been drawn on, painted over, punctured, cut up, wreathed in metal, and shot through with light. Each is distinctive, not only in the treatment of the photographic image but also in the treatment of ideas and themes suggested by this portrait specifically and portraiture in general: womanhood, aging, the openness or opacity of the sitter, distance from the viewer, closeness to nature, solitude, serenity, mystery, grace. Each makes its own singular statement, arising from the identity and practice of the individual artist, from her personal history, experience of life, and experience of making art. Among the 16, you won't find any cut from the same canvas, as it were. Each stands alone – which is as Pizzi hoped it would be. He didn't structure the process to include get-togethers for the artists to share what they were creating. It wasn't that he felt a compelling need to keep the artists' projects secret from one another – he didn't mind if someone knew what someone else was doing – but Pizzi was more interested in the adaptations to the portraits being driven by individual responses rather than a reaction to what other participants in the project were making.

It's all the more remarkable, then, that the 16 works in the Mona Lisa Project, while so distinctive, have so much in common – beyond the mutual turn of the torso and twist of the lips, that is. Flora figures prominently in several works. In Still & Solitary, Connie Arismendi makes her image dissolve into flower-laden vines – silhouetted blossoms that she has cut from the Mylar on which her photograph was printed. Thistles Beverly Penn collected from roadsides have been arranged and bronzed to frame her portrait in Hedge, while magnolia leaves Faith Gay gathered from childhood stomping grounds and family land have been dipped in powder-blue paint and hung with thread on either side of her painted-over digital-print portrait, Pink and Blue Megamix. Leaves provide the background for Judy Jensen's portrait in Skin Deep and the foreground of Liz Ward's portrait, overlaying Mona Liz With Shaker Tree of Life. The obscuring of the artist's face seen in Ward's piece shows up again and again throughout the project. In Ditto, Sydney Yeager has used thick strokes of red, white, pink, and blue paint to cover her portrait, leaving only a small window through which the left side of her face may be seen. Directly across the room in the New Works exhibition space at AMOA, Jana Swec has left almost the exact same portion of her face uncovered by the gnarled, rootlike structures drawn and painted over and around her figure in Maiden, Mother, Crone. Red lines as delicate as veins trace the skeletal structure beneath Jensen's skin – a nod to Leonardo's scientific interest in the human form – while the painted face seeming to erupt through Julie Speed's face includes a jawbone lifted from Gray's Anatomy. Perhaps the sense of rupture in Speed's Not Lisa draws from the image of Beili Liu in her untitled piece being truly punctured hundreds of thousands of times by a tiny pin. The point, pardon the pun, is to allow light through the image, literally to illuminate the subject – a quality that also figures into Sally Weber's Presence, in which her transparent portrait on glass achieves an alluring luminosity, at once spectral and serene; and in Margo Sawyer's Through the Looking Glass, where light shining through her portrait into a sculpted block of clear acrylic accentuates the fracturing of the artist's face and figure into abstracted segments, multiplying and shifting whenever the viewer moves – not unlike the way our perspective shifts with regard to any artwork (certainly the Mona Lisa) with movement and the passage of time.

And as with Sawyer's portrait, the visual elements and thematic concerns shared by the Mona Lisa Project's works proliferate the longer you're among them. It's as if these portraits are all speaking to one another, carrying on a complex, multisided conversation about art and life and identity and time and a whole host of other topics, even including a certain young Florentine housewife and mother with her hands folded on her lap and her lips curving in inscrutable satisfaction. When the works were all hung together, Pizzi heard the talk, much to his surprise. "When I walked into the room, I [experienced] a sense of chatter. I felt that there was something going on," he says. "It's something that I hadn't predicted." He had seen all the pieces and knew what they were and what they were saying, but something about their being in the same room together added a level of interactivity that was unexpected. Pizzi credits AMOA interim curator Andrea Mellard with grouping the works to make common elements pop, to get these remixed Monas talking. And they do, bouncing off one another to the extent that the viewer is treated to not merely 16 perspectives but 16 times 16 perspectives. It's a chat from which you can learn much, not the least of which is the passion for and confidence in making art that these contemporary artists share. You'll see no tentative marks or gestures in the Mona Lisa Project; the participants are too assured for that. They know what they are doing and that this is what they are meant to be doing. If you want the secret to their smiles, that may well be it.

Postscript: Last week it was announced that the Mona Lisa Project had been accepted in the ArtPrize contemporary art exhibition and competition held each fall in Grand Rapids, Mich. (Project participant Beili Liu won third prize and $50,000 with an installation she created for the 2010 ArtPrize.) The project will be displayed, fittingly enough, in the Grand Rapids Art Museum, where former Austin Museum of Art Executive Director Dana Friis-Hansen has just been appointed director. The project's exhibition at AMOA closes on Sept. 11; its exhibition in ArtPrize opens Sept. 21.

"New Works: The Mona Lisa Project by Rino Pizzi" is on display through Sept. 11 at the Austin Museum of Art – Downtown, 823 Congress. For more information, visit www.amoa.org.