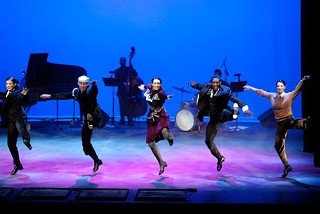 Tapestry performing The Souls of Our Feet

• How's this for an American export to China? Rhythm tap. And Austin will be providing the prime material. On June 13, Tapestry Dance Company Artistic Director Acia Gray inked a contract with the Chinese Cultural Ministry to take Gray, nine of her company's dancers, four technicians, three musicians, and a vocalist to China this October to perform Tapestry's award-winning production of The Souls of Our Feet – A Celebration of American Tap Dance that was funded with an American Masterpieces grant from the National Endowment for the Arts. The tour will involve 15 performances starting in Shanghai, with a command performance at the China Shanghai International Arts Festival. But as impressive as that is, it won't be the biggest impression of American tap that the company will leave on the Middle Kingdom. At China's invitation, Gray is developing a training system and curriculum that can be used to teach American rhythm tap in Chinese universities. For more information, visit www.tapestry.org.

• Add another honor to the many heaped upon Ada Anderson. Last Thursday, June 23, at Green Pastures, the Austin Arts Hall of Famer received the 2011 Boyd Vance Award for Advancement of the Arts from ProArts Collective. Named for the company's founder, who died in 2005, the award honors individuals and groups that actively promote and enhance the arts through leadership, participation, support, and advocacy. Heaven knows that describes Anderson, who founded the Leadership Enrichment Arts Program to ensure that minority youth could experience the performing and visual arts, formed the Circle of Friends to gather donations for the Long Center in honor of African-Americans who made significant contributions to Central Texas, served as a trustee for the Long Center, chaired the board of the Laguna Gloria Art Museum (before it became the Austin Museum of Art), and was a founding member and trustee of Austin Lyric Opera. Whew! A well-deserved tribute, Ada.