Who Gives a Damn About Big Range Austin?

The answer might be a lot closer than you think 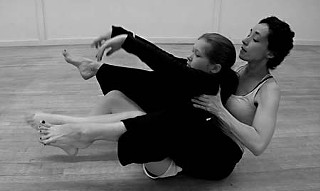 Here comes the Big Range Austin Dance Festival again, for the fourth annual time, but what difference does it make if I tell you that?

Well, if there ever were a time, these next two weekends would be it. Listen: There are so many different kinds of movement going on at Salvage Vanguard Theater for this event. Ellen Bartel of Spank Dance Company, the engine that powers this substantial gig, has corralled such a wild diversity of choreographers and dancers and gambits of kinetic expression and – what?

Yes, now that you mention it, there are a lot of dance-y things going on in town lately. Andrea Ariel's big show a couple of weeks ago, Kathy Dunn Hamrick's recent extravaganza, the Blue Lapis Light performers doing that thing they do with the ropes and spinning and gravity-defying Terpsichore so far above the boggling crowds. Why so much so suddenly, it seems, here at the start of another Texas summer?

"I think Facebook and YouTube have knitted our community together," says Bartel. "And just people being so open to things like the Big Range Dance Festival and Kathy Dunn Hamrick inviting guests to work with her ... I mean, we've always talked about ties to Houston, where Big Range started, but there's never been a real connection. And now, after three years, because occasionally some of the Houston dancers come here and some of the Austin dancers go there, and occasionally some of those Houston/Austin dancers also go to New York and some of those guys come back here ... we've started networking more, and we're all around the same age, been working around the same amount of time now. So there is a connection. And we're all," she says, smiling under the sky's bright canopy, "we're all doing what we do."

And what does that connection mean for the work itself?

"I think it's allowing people to be willing to try new things," says Bartel, "because they're being influenced by other people. I don't know if everyone would admit that, but it's impossible to be part of a scene and see other people's work and not be influenced by it – whether it's intentional or not. We're sharing ideas about how things are getting done. I don't know that we're sharing resources like money or items so much, but we're talking about how we're doing things, the process of it, and that keeps everything rolling along and not stagnating."

Stagnation? Even the usual Big Range Austin format itself, pretty tried and true over the years, isn't in danger of that: Bartel's got a major change for this year's festival.

"Dance Carousel," says Bartel. "I've moved it out of FronteraFest, where I've done it for years, and into Big Range."

Dance Carousel is a program of dances that last only a minute each, one dance after another, often set to original music composed specifically for the piece, some enhanced by video, with four microworks from each of several choreographers. It's fast, it moves boom-boom-boom, the enhanced pieces whizzing by like choice bits of sushi on one of those revolving bars, 40 dances in 40 minutes, one helluva show. But now the annual FronteraFest fringe-theatre series is going to be bereft of this wonder?

"This is an experiment to see if I ultimately want it in Big Range or FronteraFest," says Bartel. "Because, you know, nothing changes unless you change it. Without turning your life upside down, you have to make whatever changes you need. I could just keep doing the same thing, always, but ... I get really bored."

And what else does this year's Big Range provide to diminish an audience's risk of boredom?

Ellen Bartel: I'm really excited to see this woman from San Antonio, Seme Jatib, who had a great application.

EB: All the dancers have to apply, even the Dance Carousel performers – which is new for the Carousel. There's a group of judges who vet the applications – I don't even get a chance to see all the applications myself – and we try to mix it up, to make sure there are group pieces, solos, and duets, that there's a variety of subject matter, a mix of established and emerging artists, collaborations, artists on a local, regional, and even national level.

AC: So there's Jatib, and who else is bringing the good stuff?

EB: Last year, the big surprise for me was Andy Noble, who is NobleMotion. I didn't know anything about him then, but his application looked good, and once we teched his piece – it was the most amazing piece I've ever seen in my life! And this year we've got Jennifer Sherburn, who's very inventive – she has this big, huge set she's working on. Out on a Limb is a collaborative from all over the Central Texas area. And I'm always happy to see Sheep Army. And Chaddick Dance Theater, Muscle Memory from Dallas – just a lot of good companies this year. And of course there are going to be surprises in this show that I'm not expecting, from people who I might not expect to see surprising ideas from.

AC: And you've brought in people from beyond Texas?

EB: We've got Shauna Dever, from Kentucky. We actually accepted a company from California, but after a while they realized that they couldn't afford to come out here. Because we can't pay for, we can't subsidize a trip from California.

AC: And yet, this year you have a company that's from out of the galaxy?

AC: Dagobah is a planet; I think it's a swamp planet, from Star Wars? I fucking hate Star Wars, so I'm sad that I know that, but there it is.

EB: Ah, that's a group of three women – maybe there's four, but the three women that I know, they're thin, blond dancers, about my age, maybe a little younger. They're seasoned dancers, and they work hard.

AC: And it's not extraterrestrial, but it seems otherworldly: There's your Butoh performance.

EB: Yeah, this'll be the first time our Butoh improv has ever been on an actual stage. That's me and Mari Akita and Adam Sultan. And I'm bringing lights, and a friend of mine has all these old and broken parachutes ....

EB: She's a firefighter, and she's always jumping out of planes, stuff like that. So she's going to let me borrow one of her old parachutes, and that's going to be incorporated into our 30-minute Butoh performance.

And perhaps this firefighter will be there in the audience with you, reader – in case some dance, or a sufficient number of dances, is so hot that the whole of SVT ignites from sheer brilliance and friction. Then you'd definitely give a damn about the Big Range Austin Dance Festival. Why, you'd be telling people for years how you were at Salvage Vanguard when the Big Range's awesome kinesis sent the theatre itself up in flames and you escaped alive and unharmed only because Ellen Bartel's friend saved everybody's ass with an old parachute.

But you don't need that to happen, right? No, the BRADF lineup is enough to ignite a different set of flames in your beauty-loving soul. And we look forward to seeing you there, among the music and movement and media-enhanced explorations of the art that human bodies can achieve.

Festival participants are from Austin unless otherwise noted. All performances are at Salvage Vanguard Theater, 2803 Manor Rd. For more info, visit www.spankdance.com or www.bigrangeaustin.org.