This funny, naughty musical is the perfect show for a Sunday afternoon 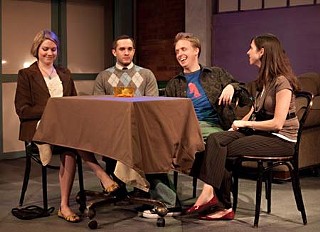 I have found it: the perfect show for a Sunday afternoon.

Written by Joshua Salzman and Ryan Cunningham, it's produced by Penfold Theatre Company and directed by one of Austin's masters of musicals, Michael McKelvey, in one of the last shows he'll direct in Austin before he moves to Pittsburgh. It is a chamber musical of no pretensions, with utterly charming set design by David Utley. Using two projection screens and moveable set-pieces arranged quickly and smoothly, Utley evokes multiple locations in contemporary New York. Everything about this production is quick and smooth, from Glenda Barnes' constantly changing costume designs to Monty Taylor's rhythmically moving lights to the two-man band of Trevor Detling on percussion and Steve Saugey on piano.

And best of all: It's about love. What could be better, especially on a Father's Day Sunday afternoon? Austin (Andrew Cannata) loves Catherine, and they're planning a life together until he walks in on her in bed with someone else. While Austin seeks solace in his way goofy big brother Jeff (Tyler Jones), Marcy (Haley Smith) seeks a similar solace in her best friend Diana (Amy Downing) because Marcy has just broken up with Larry, her 27th boyfriend. Austin, Catherine, Jeff, Marcy, Larry, Diana, you, me, and everybody else we know – if you're alive, you've been there, and you will identify with every "It's not you, it's me" you hear lyrically floating into your ears.

One of the really great things about this production: The actors don't wear microphones, and Detling and Saugey never overwhelm the voices, so you hear pure, unamplified human sound, and it is a joyous thing. And what wonderful voices to hear. I've seen Cannata play a lot of young everyman types, and every one of them is different. Here he's the conservative falling for Smith's oh-so-very-sweet free spirit Marcy. The great thing about Cannata and Smith together is that you believe they're falling in love, and that's always fun to watch. Same goes for Jones and Downing; they're falling in love, too, but in a goofier, cuter, less romantic, more supporting-comic-actor sort of way. And I haven't even mentioned Stephen Jack and Sarah Marie Curry, who play all the neighbors, bartenders, waiters, and baristas that every young urbanite encounters and who stir the house to laughter and applause after every scene and song, just like the other four. And while the songs are catchy and the numbers are both laugh-hard funny and often touching – one, "The Actuary Song," is a truly great patter song that Downing pulls off to perfection – there really isn't a memorable tune in the bunch. Which makes what Cannata, Smith, Jones, Downing, Jack, and Curry do seem all that much more impressive. Because they love it, people! They love it; you'll love it! Love, love, love!

And just so's we're clear: This show is for mature audiences, but the thing is, it's naughty, not raunchy. Naughty as in a really sweet, really wholesome kind of raunchy. So if you're of a certain age and you're a male or a female and you've ever been in love, it's the perfect show for a Sunday afternoon. Or a Thursday, Friday, or Saturday night, even.