On the eve of its big 25th anniversary season, the Austin Lyric Opera looked like it was facing its own Götterdämmerung. A mountain of debt reportedly approaching $2 million and the resignation of Kevin Patterson as general director in May suggested the crashing finality of a Wagnerian twilight. And indeed the organization's board of trustees was said to be questioning whether it should move forward with the milestone season or simply cease operations. But after listening to the recommendations of four task groups at a meeting on June 14, the board opted for the former. ALO will proceed with the three productions previously announced – Mozart's The Magic Flute in November, Donizetti's Lucia di Lammermoor in January/February, and Puccini's Turandot in April – albeit with shorter runs: three performances each instead of four. (The curtain is falling on the Wednesday night shows.) In another cost-cutting move, ALO is surrendering its own box office services and letting the Long Center handle ticketing for all of its productions. While the board hunts for a new general director, the opera will be led by Kevin Smith, who left Minnesota Opera in February after serving as its president and chief executive officer for 25 years. His tenure there is notable, at least in part, for starting with a deficit of $36,000 in 1986 and ending with a surplus of $28.75 million last year.

And speaking of millions, ALO hasn't yet drained all that red ink that it's swimming in, but in the press release announcing its recent changes, the organization claimed to have raised almost $1 million in donations and pledges through its "aggressive" 25th anniversary fundraising campaign. For more information, visit www.austinlyricopera.org. 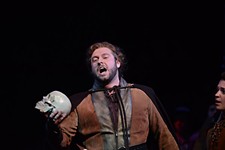