The show lacks energy, but its songs, voices, and comic spectacle are intact 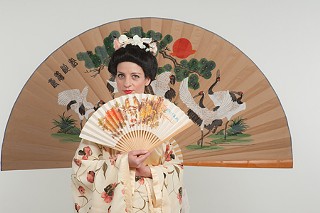 There's no telling who originally had the idea to dedicate a company to the famed Savoy operas of W.S. Gilbert and Arthur Sullivan and stage their delicious and wittily subversive work at least once every year. The idea didn't originate with the Gilbert &

Sullivan Society of Austin, as many cities annually stage the works of these masters of music and comedy, but whoever had the idea had a good one, as the practically packed auditorium at the Travis High School Performing Arts Center this past Saturday night would attest. This annual Austin tradition is popular, and rightfully so, as the stories that Gilbert wrote are just plain funny and the tunes that Sullivan composed are as memorable as the best of summer days.

Along with The Pirates of Penzance and H.M.S. Pinafore, The Mikado is one of the duo's masterpieces – quite probably their best. Titipu is an almost comic-book town in Japan ruled over by Ko-Ko (Arthur DiBianca), a Lord High Executioner loath to hold an axe, and his sidekick Pooh-Bah (Robert L. Schneider), who holds every other office in the town, making it easy to gain a quorum. Enter the son of the mighty Mikado, Nanki-Poo (Holton Johnson), disguised as a common minstrel, seeking the lovely Yum-Yum (Tamsen Cohagan), whom he saw from afar and wishes for his wife, knowing she is betrothed to Ko-Ko. Romantic complications abound, especially when the Mikado (Russell Gregory) makes an appearance accompanied by the repulsive Katisha (Janette Jones), betrothed to Nanki-Poo.

With the plethora of vocal talent available in the Austin area, you would expect the Gilbert & Sullivan Society to field some fine voices, and you wouldn't be mistaken in your expectations. Music Director Jeffrey Jones-Ragona is blessed with the tenor of Johnson, who opens the show effectively with "A Wandering Minstrel I" and brings a similar vocal richness to more than a half-dozen other numbers. DiBianca takes on one of the more difficult songs in the canon with "Behold the Lord High Executioner," keeping it precise and grounded. Watching Gregory's Mikado is great fun; besides having a deep, booming voice, Gregory really looks like he could rule imperial Japan.

Few live theatre events are more difficult to stage than operas. Imagine having to put singers, sometimes dozens, in their best positions to vocalize while maintaining visual interest on the stage. Now imagine having to tell a story that contains a level of believable human interaction while most of the time everyone is singing operatically. Challenging, to say the least, and director Ralph MacPhail Jr. and the cast are up to that challenge but don't quite meet it. MacPhail has staged the show simply, with choreography that consists of little more than people walking from place to place and moving their hands (and their fans – there are lots of fans) in a variety of ways. But on opening weekend, the show lacked energy. Simple often works, but it looked rote and under-rehearsed. It might very well have been that the performers were tired – opening weekends can wear you out.

While deciding whether or not to go to this production, keep in mind that you might not get a chance to see this gem for another six years or so; G&S last staged it in 2005. And this time around, you'll certainly find the voices, the songs, and the comic spectacle of imperial Japan intact and ready for your musical delectation. If you do want to go, given the very full Saturday house on opening weekend, you'd best get your tickets fast.