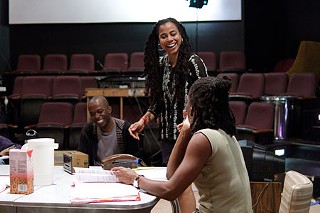 A play's first production is unquestionably important. What were simply lines of dialogue on a page now become utterances spoken by characters of flesh and blood. Actions, previously described in words, come alive in space and time, building emotions, story, and drama that now can connect in a very immediate, visceral way with the audience.

But a play's second production can be equally important – for the author anyway. Having seen in that initial production how actors shaped the text, how the play's actions cohered into a dramatic arc (or failed to), and how audiences absorbed the story and responded to it, the playwright can use that follow-up production to make adjustments to the script: adding information here, removing information there, clarifying the story, illuminating themes, or just plain making the play better.

In March 2010, Suzan-Lori Parks was able to see her play The Book of Grace come to life at the Public Theater in New York. The play, set in the South Texas home of hard-nosed Border Patrol agent Vet and his optimistic wife, Grace, sees Vet's estranged son from a previous marriage arriving for a visit. Zach Theatre Artistic Director Dave Steakley saw the premiere and felt that the three-character drama was well-suited to Austin, and he invited Parks to direct Zach's production herself. It opened June 2, and although The Book of Grace has been mounted in Cleveland and Boston since its premiere, the Pulitzer Prize-winning playwright considers this local staging to be the play's true second production. Here she explains why and what she's learned about her own play by approaching it as a director.

Suzan-Lori Parks: I think it's a good thing to do if you feel like it, you know? I love working with talented directors. There's nothing better. I've worked with all kinds of directors, from Spike Lee to George C. Wolfe to Richard Foreman. Michael Greif. Jo Bonney. Liz Diamond. Great directors. And I've learned a lot from working with them. At the same time, it's good to try new things. The middle road, I think, is the better road. [Saying] "I'll never direct my work" is as dumb as saying "I'll always direct my work, 'cause I'm the only one that ever understands what I've written!" You know, that's extreme, so doing it every once in a while I think is good. It's fun. It's interesting.

AC: Does it push you in different directions? Does it exercise different muscles?

SLP: Sure. I have to stay up later. I have to watch every show. If I were just the writer, I would be taking off a few days around now because it helps to take a breather from watching every night. So it pushes that muscle, the sort of patience muscle. Also we've got three great actors in the show: Nadine Mozon, Shaun Patrick Tubbs, and Eugene Lee, who's also a wonderful writer, and they're very respectful and talented, and it's interesting, because when they flub a line or say it wrong or forget it altogether, during notes they're like, "Sorry, sorry, sorry," 'cause it's my line. I wrote it. So I'm not just the director giving them a line note, I'm the writer who's giving them a line note, too. So you have to practice that gentle touch, so everyone can feel encouraged along instead of berated and shamed.

AC: What did you learn from the first production?

AC: How does that play out in The Book of Grace?

SLP: These people are just people, like anybody else you know. Because the most important part of the play is the family dynamic, which is manifested specifically through these three characters. That's the most important thing about the play. When people saw Topdog/Underdog, people who were not African-American said, "Wow, those could be my two brothers" or "That could be me and my sister" – that kind of thing. So the dynamic was not limited to a certain ethnic group. Or a certain place. It wasn't an urban black dynamic, you know? It was just a dynamic of tension and frustration, and I think the same thing goes with this. It's a dynamic of tension and frustration.

That being said, I think we are benefiting enormously from having an all-black cast here. Because in New York we had a multiracial cast, and in conversation with people I realized that there was a huge misunderstanding about the play. Because of the multiracial cast, [with] John Doman, who's a white actor, playing the father [and Amari Cheatom, who's a black actor, playing the son, people thought] that the father didn't like the son because the son was black. And I'm like, "Ooh, the father doesn't like the son because the father's got problems." And with Elizabeth Marvel, a white woman, as Grace, [people thought] that I was saying the message, quote-unquote, of the play was that grace is represented by white womanhood. To say that grace is embodied by white womanhood, black womanhood, Asian-American womanhood, or any kind of womanhood is ridiculous. You're not listening to the play. So I was joking that in New York it was The Book of Race.

There have been two other productions of this play, one in Cleveland and one in Boston, and I asked them not to copy our [New York] casting, because that was a mistake. I said, "I loved my three actors in New York. We had a great time. It led to a misunderstanding. Please don't do it that way." But there's a tendency for people to go, "But that's what it means!" And even with me reaching out to them, they went ahead [with multiracial casts]. And I thought: "They're not doing the play. They're doing ... something else." So this to me is the really real second production of the play.

And with this all-black cast, not only are we really getting into the rhythms of the play much more thoroughly, I think; it's very clear that it's about family. It's not about a racial dynamic. While I think it can be done with any groups of people, I think it's most effective being done homogeneous racially. And I would prefer it being done with African-Americans, 'cause why not? There's no reference in the play to "I'm a black person, and so I think this about you." There's nothing like that. They're just paranoid, frustrated, and weird. Like all of us, I think.

AC: When one person is both writer and director, there's a split personality thing that arises sometimes. I often ask people who are filling both roles at once how much the writer and director argue with each other. "All the time," they say.

SLP: My experience – and this might reveal everything about my personality – my experience is very different. I gotta say, I didn't know that the play was as good as it is until I was actually in it, realizing that I've laid in verbal cues for blocking. Like when Grace says, "Camp David? You know the place where ...?" – that's a cue to get the place setting. It's full of blocking cues. And I'm like, wow! I didn't really know that they were there. We didn't explore them in New York. But I think they're in all the plays – they're laid in like that. 'Cause I'm thinking of movement as I'm writing. I'm not thinking of the specific movement that they're doing here, but it's very easy to figure out the movement. It's very clear when she's crossing to him. The line is telling her when to walk, when to stop. Like yesterday, we were working on a part where I was telling Grace: "Follow that with your body. He's pulling you. And he's going to tell you what to do next." The actors looked at me. And I said, "Eugene, say your line." And he said, "Look at the kid, working the iron like his old man." "That's your cue to look. Before that, you're here." It's very small things, but I'm surprised. Like, "Wow! Look at all this information in here." I really didn't know.

It's creepy, actually. It's creepy when you're writing the thing that you're supposed to write. That's one kind of creepy that I'm much more familiar with and used to, and I don't really think anything of it. Like you can say that's the hand of God, and I'm writing, you know what I mean? Or the god Ganesh is transcribing the Vedas. I love that he's a transcriber. He's copying. So I'm listening and I'm copying. That's cool. That's the higher power or whatever. But to be directing and to hear something in the play – "I wrote that." Oooh. It's a map. It's a road map embedded in the play that I didn't even know was there. That's a little creepy. It's a little odd.

By Any Means Necessary
Suzan-Lori Parks works it – and helps you work it, too 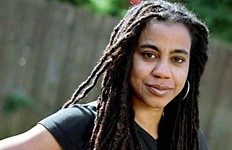