• Texas State University musical theatre students have a video hit on their hands. Some months ago, during one of Andrew Lippa's stays in San Marcos as the musical theatre program's first composer in residence, the composer of Broadway musicals The Addams Family and The Wild Party, as well as cult hits such as john & jen, finished writing the song "It Gets Better" – his contribution to the national anti-cyberbullying campaign – and had a group of nine students join him in the studio to record it. With Lippa being so well-known, the video landed a mention on www.broadwayworld.com. As a result, it's been viewed more than 7,000 times in its first week. To see it for yourself, visit www.youtube.com/user/txstmusicalthea.

• Palindrome Theatre is headed to Scotland in August and not just to escape Central Texas' brutal heat. That's when the Edinburgh Festival is happening, and the company will be taking part in it this year, performing a 90-minute version of its recent adaptation of Hedda Gabler Aug. 5-29 at the Hill Street Theater. Since it takes money to get there, the company is having a fundraiser on Wednesday, June 22, 7-10pm, at the South Austin Trailer Park & Eatery, 1311 S. First. A $25 contribution gets you access to a nacho bar by Torchy's Tacos, discounted drinks, live music by Matt Hines of the Eastern Sea and Shawn Jones and Lauryn Gould of the Lovely Sparrows, and the chance to mingle with the show's cast. Before taking it to Edinburgh, Palindrome will present its revised Hedda Gabler July 28-30 at Salvage Vanguard Theater, 2803 Manor Rd. For more information, call 939-6829 or visit www.palindrometheatre.com.

• June 24 is the last day for Austin-area artists to submit work for "Austin Art Boards." The juried visual arts competition sponsored by Reagan Outdoor in cooperation with the Austin Visual Arts Association will reproduce original art by 10 selected winners in large scale and display it on billboards throughout Austin over the next couple of years. Submissions may be in any medium but must be sized to 6 inches by 24 inches. For full submission guidelines, visit www.austinartboards.org. 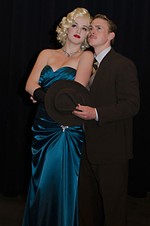