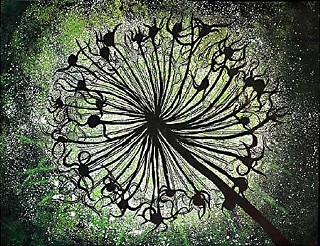 It's not true that David Berman met with Jill Schroeder last year, in some shadowy dive bar or otherwise, and said: "Look, I'm moving the D Berman Gallery to Wimberley in about a year, so I'd like you to open an Austin visual-arts venue of your own that's remarkably similar, in its spare elegance and generosity of display space, to what I'm vanishing from the ATX. By way of, you know, compensation."

At least, acknowledging that nobody can prove a negative, we're pretty sure that conversation never happened. And yet, here's grayDUCK Gallery, opened little more than a year ago and run by Schroeder on Monroe Street off South First, and the similarity of physical space and aesthetic vibe provoke a certain déjà vu, especially if one is a recalcitrant art lover visiting the venue for the first time.

But also, part of the similarity is due to the quality of the artwork on display in the current "Rock, Paper, Carbon" show. Which is to say: Quality? Yes, top quality.

"Natural forms, genetic modification, flickering conversation, and molecular structures are all explored in this organic show," says the gallery's info sheet. What's left unsaid is that these "explorations," which is sometimes a code word for haphazard expression of whatever, are not just messing around. What's left unsaid, but which the eye can discern with scrutiny, is that the amount of craft that went into these explorations is more than equal to their considerable beauty, and that beauty is the result of the thought that drove the process of craft.

Sabra Booth limns natural forms – delicate Finnish plants, dried Japanese fungi – onto fine paper with pen and ink and watercolor, for starters, then sometimes adds gouache, spray paint, and collage to the illustrative methods, rendering the floral images toward realism or realistic silhouette with a combination of precision and verve.

Margaret Craig provides colorful and complex displays of her vision of existence, a vision that includes the interiors of objects in an almost X-rayed fashion, overlapping the micro and the macro, suggesting (as she puts it) the "translucent membranes on which the universe resides and puckers." Each piece is created with a variety of techniques sufficient to earn a black belt in printing: etching, marbling, chine colle, digital transfer, and collograph. And that's just her two-dimensional works. Craig also makes sculptures of jellyfishlike creatures by manipulating hand-printed sheets and strands of epoxy resin; these hang eerily from the ceiling near one corner of the gallery.

Daniel Kaplan also works in three dimensions, and his creations set up another resonance of Berman in the grayDUCK. You ever wonder if a person could create something that was wholly their own – whatever that means in this interconnected life – that wasn't lamely derivative but that nonetheless reminded you of Lance Letscher's work? Like maybe you armchair-quarterbacked the last Letscher show, going "No, damnit, he should've done this instead of that; he should've forged into that new territory, not this one," y'know? Imagine someone fulfilling those desires with papier mâché tubes, some of which resemble lengths of calligraphy made flesh. It's like this: Whoa.

And then there are Leigh Anne Lester's works, and we can feel the universe residing on the membrane of a single equation: skill + simplicity = brilliance. Lester perfectly draws botanical specimens on carbon paper; then she affixes the marked black paper, reversed, next to the image she's created on white paper. So much beauty out of fierce precision and caring.

It's not true that I recently met with Lester, Kaplan, Craig, Booth, and Schroeder, in some shadowy dive bar or otherwise, to toast their health and continued success. But I do it here with much admiration.