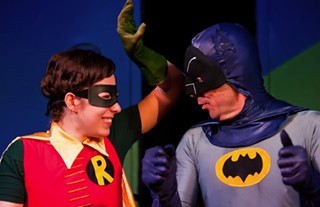 Robin the Boy Hostage (as his detractors used to call him) and his mentor Bruce Wayne, aka Batman, are parodied and celebrated in full improv splendor in this latest offering from the ingenious goofballs at the Hideout Theatre.

No baroque Tim Burton crime fantasia here; no gritty Christopher Nolan vigilante realism; no goddamn Joel Schumacher bat-nipples to contend with. No, this comedy is based on – note the show's title – the ABC series of 1966-68, the one starring Adam West and Burt Ward, the one that was camped-up to sweet pop-cultural absurdity just as the Batman comic book itself was returning to a more serious vein of mythologizing.

Grant me this: All other things being equal, comedy improv is easier than serious improv. Because, for one thing, if you're doing serious improv and something doesn't mesh well or is otherwise off-kilter, it's a microfail that can render an audience apprehensive. But if the same thing happens during comedy improv, hell, it is – especially if it's handled well – part of what makes the good stuff so spontaneously hilarious.

Does it matter that Deano Jones and Kaci Beeler are terrific improvisers? Does it matter that Jones has nailed Adam West's speech and mannerisms perfectly, that Beeler has done just as well with Burt Ward's embodiment of eager sidekickery? Does it matter that the two of them, in full costume, bring unstoppable bat-power to the bat-stage for every episode of this bat-spectacle?

Of course it matters, citizen, don't be silly. But it doesn't have to matter. This is not only comedy improv, which is a send-up of reality; it's an improvised version of a send-up of superheroic unreality. So it's almost irrelevant that the ensemble of improvisers in supporting roles – Commissioner Gordon and Chief O'Hara, various henchmen and victims and bystanders – are skilled and clever in their performances. It's almost negligible that, as in the old TV show, there's a special guest star as the villain each week and that that villain is created from audience suggestion. (But it's not negligible, because the villain's necessary to provoke the earnest bat-reaction that fuels each narrative's conflict. It's not negligible, because the guest villains have been, so far, top improvisers Shannon McCormick, Mike Kinald, Asaf Ronen, Tom Booker, and Shana Merlin – with Lauren Zinn, Justin Davis, and Kareem Badr yet to come.)

I mean, c'mon, this material is already comedy gold. The only way to really fuck it up would be to not capture the madcap nuances of the original series. And these guys at the Hideout have captured just that. The Dynamic Duo's sometimes contentious, obliquely homoerotic mentor-and-ward relationship; the cluelessness of the Gotham police force; the wacky gimmicks of the week's villain; the walking-up-the-side-of-a-building, complete with Sixties pop-cult cameo; the centrifugally enhanced Batmobile scenes; the deus ex machina escapes afforded by our heroes' utility belts – it's all there.

Bottom line: You don't have to be familiar with the old TV series to enjoy the hell out of this show, although, if you are, you'll enjoy it even more. Regardless of your superhero fanaticism or lack thereof, this comedy is enough to make your own inner sidekick exclaim, "Holy 'Holy 1960s Batman, Batman!,' Batman!"