Taking the summer grab for dancers one step further

Each year when Ballet Austin's last performance of the season closes in May, its dancers disperse in search of summer work. They're contracted for just 34 weeks (pretty standard for American ballet companies), so for the rest of the year they cobble together a schedule of guest appearances and teaching gigs, not only for pay but also for keeping in shape, building their résumés, and developing artistically.

So for choreographers who prefer to work with ballet dancers – those technically strong, impeccably trained, full-time professionals who are tied up with relatively well-paying companies during the performance season – summers are golden. "A lot of choreographers just grab dancers in the summer," explains Ballet Austin dancer Beth Terwilleger, who last year founded Califa Arts Collaborative, a summer project that formalizes that process. Choreographers working with Califa get not only talented and willing dancers but also a performance venue and full production, as well as visibility afforded by the group's ties with Ballet Austin. Califa also encourages choreographers to collaborate with visual artists and musicians, both for audience-sharing and creative expansion.

For her piece, Hart is collaborating with photographer Latief, who will create new photographs of the dancers for onstage projection. "I see the photographs as almost being another character in the piece," explains Hart. Latief and Hart intend to tell a separate story, although each will begin with gestures Hart created in collaboration with the dancers. The gestures were the product of an emotionally grueling rehearsal that dancer Oren Porterfield describes as a "therapy session." Despite the difficulty, Porterfield says the dancers feel empowered by "being asked to think and be creative" more than is sometimes expected of them during the ballet season. "I feel more comfortable taking risks in rehearsal, because we're trying to create something new" – and that's a new audience as well as a new work.

It's a mutual investment in each other's ideas and the motivation of being an intrinsic part of a group with a purpose that creates devotion to the project, despite the lack of pay. "Because it's sort of informal, there's a sense of ownership," says Porterfield. "You're really helping to create this, investing your time." Likewise, says Hart, the support of dancers is a boost of confidence: "If dancers do commit, it shows that they feel strongly enough about what you're doing." With Califa, Terwilleger seems to have tapped into dancers' desire to engage in collaborative, creative processes and develop artistically in directions that are often difficult to access. And for ballet dancers, it's a matter of collecting as many rewarding experiences as possible before retirement looms around age 40. "A few years ago," Terwilleger says, "I realized that our careers are short, and that I had to go up to people like Jen [Hart] and say: 'I love your work. I want to work with you.'" 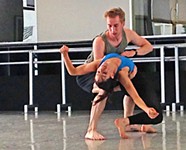