Giving comfort and calm with a violin Samuel Thompson didn't have much with him in the New Orleans Arena when he was stuck there with thousands of other Hurricane Katrina survivors, but he had his violin. And when someone asked him to play it, the classically trained musician responded with the "Adagio" from Johann Sebastian Bach's Sonata No. 1 in G Minor and the "Andante" from the composer's Sonata in A Minor. It was an incongruous sound in that pit of deep misery but one that was so, so welcome – a balm for the masses who had suffered so much for days and had no idea when their ordeal might end. Thompson played for only a few minutes, but his moving gesture was captured by a photographer for The Advocate of Baton Rouge, La., and circulated worldwide, and recounted by a writer for the Los Angeles Times. It brought the South Carolina native a burst of international attention.

The fame generated by that incident isn't why ProArts booked Thompson for its 2011 Black Arts Movement Festival, but the story reveals much about the musician and the man: his devotion to his instrument, his commitment to his craft, and his compassion for his fellow man. It's little wonder, then, that in the six years since, he has steadily developed a career as a soloist, a chamber musician, and an orchestral leader. This Sunday, June 12, Thompson plays Ebenezer Baptist Church, 1010 E. 10th, with a program including some Bach, naturally (Sonata in A Minor for Unaccompanied Violin); some Brahms and Saint-Saëns (the former's Sonata in D Minor and the latter's Havanaise); and three works by African-American composer William Grant Still: "Summerland," "Carmela," and "Quit Dat Fool'nish." If the music he makes can cut through the noise and chaos and pain of a sports arena in post-Katrina New Orleans, imagine what it must do in a house of worship. 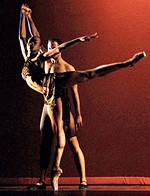