On Monday, June 6, the Austin Critics Table handed out its annual awards for outstanding achievements in the Austin arts in a ceremony at Cap City Comedy Club. This year's event was the 19th presentation by this informal association of local arts writers and the 10th anniversary of the Austin Arts Hall of Fame. In recognition of the milestone, a special class of 25 honorees were inducted into the Hall of Fame posthumously (see "First Generation," June 3).

In the awards themselves, Zach Theatre's The Drowsy Chaperone took top honors with five awards. Recognized with four honors each were the Rude Mechanicals' original musical I've Never Been So Happy; Salvage Vanguard Theater's Heddatron, which won three awards and a special citation; and Conspirare's concert series Renaissance & Response: Polyphony Then and Now. Overall, 48 productions, exhibits, works, or artists were recognized.

You Wouldn't Know Her, She Lives in London, The Hidden Room Theatre/Look Left Look Right 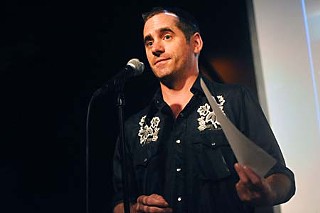 Nigel O'Hearn, At Home at the Zoo

I've Never Been So Happy, Kirk Lynn and Peter Stopschinski

The Man Who Mistook His Wife for a Hat, Austin Lyric Opera and Austin Chamber Music Center

Matthew Treviño, The Man Who Mistook His Wife for a Hat

Songs of the Soul, Robert Kyr

Amelia Turner for her makeup for MilkMilkLemonade

The Miró Quartet for its 15 years with Sandy Yamamoto, Daniel Ching, Joshua Gindele, and John Largess

These Are the Droids You're Looking For Award

Austin Goes Classical, Graham Reynolds, and all the students and teachers involved in the Guitar Foundation of America youth ensemble performance of "Powerman"

Texas Performing Arts for its adventurous bookings of classical music

Travis Knights, Voices of Rhythm/Are You Listening to Me?