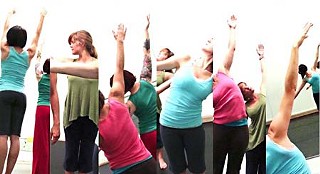 In between several of the five dance pieces on the hourlong Up, Down, Under and Through program presented by Ready|Set|Go!, I found myself wanting more space to process the last work before the next one began. The program's efficient pacing might have been merciful in another context, but with several weighty and charming works on the program, a few more moments in the dark seemed warranted.

In "Forward Backs\ash," an unpronounceable quartet by Kristen Frankiewicz, the muscular physiques of both the women and men were complementary, and the dancing, including work with ropes – lassoing, twirling, wrapping, and draping – was well executed and interesting. But the piece seemed to suffer from a problem of halves: Two women and two men danced two sections, near equal in length, resulting in a lack of dynamics and structure. The work with props may have also benefited from a lighter touch – tricks, like rope-wrangling, often work best when they're acknowledged, at some point, as tricks. During the second half, the most giving movements were those that seemed to ebb naturally from the cushioned bobbing of an Iron & Wine song.

"Prink," choreographed and performed by Michele Kitchen, was a ballet-inspired solo with a few hesitantly playful moments, but overall, the intention was vague in a performance that seemed half-hearted. The opposite was true of Rosalyn Nasky's "Poet's Love." A keyboardist (Rick Rowley) and singer (Brian Pettey) performed Robert Schumann's "Dichterliebe" song cycle while Nasky, in white and stationed slightly upstage from the singer, embodied the music through explorations of her body and its seemingly spontaneous emanations. The result was both a candid study in anatomy and a sensitive display of a body moved by music. Sinews, tendons, and skin, in contortions and isolations – I didn't want this piece to end. Luckily, the piece will be revived July 2-3 as part of Big Range Dance Festival.

In her charismatic, vibrant "solo solo," Errin Delperdang, in red running shorts and a T-shirt, performed an energetic warm-up to whatever was coming out of the earphones of her iPod and then made infectiously fun movements, aerobic in their repetitiveness, to a Stevie Nicks song. The audience – or should I say the smattering of people – was a bit serious, but I found the cheeky yet honest moves great fun, and Delperdang's (and Nicks') energy and clarity had me smiling. Then Delperdang pulled out a great emotive trick: She stopped moving, looked out at the audience, and began singing over her labored breathing as the Nicks song faded out, belting out these lines sung by Peggy Lee: "Is that all there is, my friends? Then let's keep dancing/Let's break out the booze and have a ball." After this thrilling outburst, she moved in silence to end the piece. I hearted it.

After "solo solo," I honestly didn't want to see another piece. I wanted to sit and think about Delperdang and Stevie Nicks and Peggy Lee and what moving in silence had to do with all of them. But the final work, "Poor Stacy" by Janna Rock, was persistent, and eventually I came back around. I don't know who Stacy is, but my guess is that she has some pretty intense issues. The dance contained some attention-getters: Three women in pajamas (asylum patients?) moving solemnly, supportively, carried what I was sure were plastic Easter eggs until one was spat – yes, spat – on the floor and broken. Real eggs. More were broken, and after cautiously toeing around in the resulting goo, the women were drawn to men eating ice cream cones, which they fought for, albeit rather meekly, and consumed.

While I'm not sure what to make of "Poor Stacy," I am certain that the program as a whole deserves to be seen by more than those who attended on opening night. It's a cheap date (tickets are just $12 at the door), and although the second week's program is completely different (with work by Katherine Hodges, Jennifer McGowan, Aileen Mapes, Lisa del Rosario, and Julie Nathanielsz), the quality of the first week's program is a positive indicator.