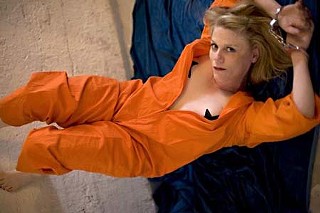 Keira McDonald loves flying solo. "You can rehearse anywhere anytime, and you don't have to coordinate with other people's schedules," says the creator of the solo shows Showerhead and The Bridesmaid and co-founder and director of the Seattle Solo Performance Festival. But more significantly, she adds, solo work means "you can be anything that you can imagine without anyone telling you it's a bad idea. The audience will let you know if it's a bad idea. The downside is that you can fail spectacularly (which I have many times), but I would rather bomb gloriously by trying something new rather than be safe and mediocre."

Though based in the Emerald City, this Fort Worth homegirl returns to Texas regularly. "I need the vitamin D and the warm people," she writes via email, adding that it's "very therapeutic to look at some hot guys who aren't pasty and depressed. VERY THERAPEUTIC!" The benefit for Austinites is that she brings her shows to our town periodically – such as this weekend. She's at Hyde Park Theatre for a two-night run of CockTales With Astronauts, a work that includes a version of Astronaughty, a musical inspired by astronaut Lisa Marie Nowak's drive to Florida to confront a romantic rival that McDonald performed in FronteraFest and at the Blue Theatre. Here, she talks about its inspiration and development.

Austin Chronicle: At what point did you decide that Lisa Marie Nowak's wild ride would make a good solo piece?

Keira McDonald: Well, when the news about her getting arrested broke, I was absolutely obsessed with the whole story, which was just so outlandish. Like she did what? There were so many layers. The fact that she is a female astronaut and went to the naval academy and had just been in space and that it was a love triangle with another astronaut and then the bit about the "alleged diapers." It captured my imagination in every single way – I read everything about her that I could get my hands on. I read her interrogation, and it was like a Mamet play. In my gut I knew it had to be a musical because the emotions and imagery were so strong. My heart just absolutely went out to her. I mean, who hasn't had their heart broken? I also wanted to explore the way the media (especially tabloids) treat people who make mistakes. I guess you could call her a fallen hero, but I wouldn't want to be judged by my worst moment in a time of desperation. We as a society just love to see people fall and fail. It's like we are comforted when someone does something bad or wrong, and we take such comfort in calling them crazy. Maybe we need people of stature to make bad mistakes, or maybe it makes us feel superior. Like hey, if an astronaut went cuckoo, I don't feel so bad for giving that guy who cut me off the finger.

AC: Was there anything different for you about creating this piece? What has the response been like?

KM: I usually write fictional or semi-autobiographical stories for myself to perform. This was the first time I decided to use a real event as a springboard. But it is not actually accurate. It is loosely based on her story with a lot of imagination. I cannot know who she is or why she did what she did; I can only imagine.

It has been through many variations. The first time I did it, it kinda bombed. It was at a festival in Regina [in Saskatchewan]. The Canadians did not know the story, and they don't have the same kind of emotions about astronauts and space travel that we do. Also, I think I was trying too hard to be respectful of her and the story, which did not allow much room for play. When I decided to make her another character, I took more risk and it got way better. I failed spectacularly at first, and then I put it away for about a year. A friend who has seen it and really believes in me and the story asked me to do a bit of it for a cabaret in San Francisco, and I felt I was onto something again and the response was good. So I kept workshopping it. The best response I have gotten to it is from audiences in Texas and Orlando, where the story takes place. People know the story, and they have emotional ties to the space program. At first it was a full-length play, and now it is a tight 15-minute all-musical wild ride. I wanted it to be a longer piece, but the art and the audiences like it tight, so I just let it be what it is. That is why it is paired in this show CockTales With Astronauts, which is a one-woman burlesque/cabaret full of raunch and heart. I am the queen of the happy sad sandwich. I love it when I can make people laugh really hard and then reach in and break their hearts. It's my goal as a writer and performer. To laugh and cry at the ridiculousness of being a human being alive at this very moment in time. 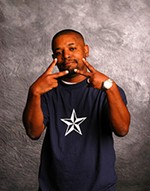